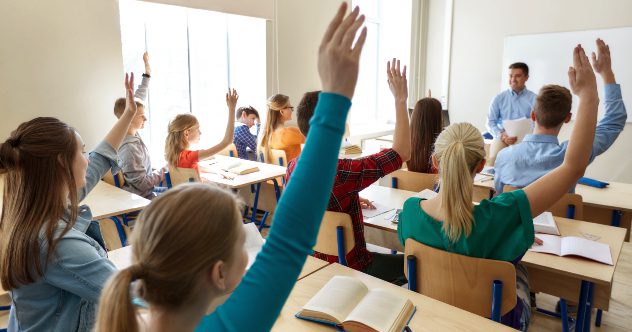 Schools teach us valuable things. At least that’s what’s supposed to happen. But in some instances, what we learned was questionable. Will we use this? Should I be learning this? Who is telling me to put what where?

From stupid questions to egg babies, we learned some pretty weird stuff in school. Here are the top 10 pointless lessons that take the cake.

Remember when your teacher said that there’s no such thing as a stupid question? Life has shown us that maybe they might be a little (or a lot) wrong. Granted, schools need to teach children that asking questions is a good thing. When they teach this philosophy, students are more inclined to participate in class and, hopefully, won’t feel judged if they don’t understand something.

Schools should take a better approach: “there are no stupid questions, but you can ask them without sounding stupid.” Asking a question the right way matters more as an adult. No matter what your fourth-grade teacher told you, you can’t afford to look stupid, nor do I think you want to.

Asking questions confidently in a way that communicates that you’re capable is better than sounding like a simpleton!

9 Reciting The School’s Alma Mater Teaches You Nothing

This is maybe more for private schools and colleges. One of the “things” you had to do was memorize the alma mater. You know, that song you had to sing maybe once a year. But if you’re honest with yourself, chances are that you forgot it completely…or didn’t even memorize it.

What we learn is supposed to impact our lives in some way, and an alma mater is an anthem you forget as soon as you graduate. No one goes to an interview and starts belting out their high school alma mater unless there’s a coincidental alma mater connection between you and your interviewer.

The only real damage singing your alma mater did was ruin your chances of becoming a pop star. No, you don’t have the voice of an angel. Sorry.

Anyone who ever took geometry and trigonometry will tell you that they learned about equilateral, isosceles, and scalene triangles. But unless you’re a mathematician or architect, knowledge about triangles is a waste of valuable memory cells. And while the basics of triangles are important to know, a2 + b2 = c2 has no regular use in the real world.

In fact, for most of us, the only time we care about triangles is when we order pizza and then ask ourselves which triangle is the best one to eat. I bet you won’t return the pizza just because instead of a perfect isosceles, you got a crooked scalene. We’re more focused on whatever slice has the most toppings, right?

Yeah, it definitely says something that we value eating more than knowledge here. Oops!

7 The Cringiest Hour: You Learn Nothing in Sex Ed

Wait, wait, wait! I’m not saying that sex education was unnecessary or useless—quite the opposite. But sex education is weird, okay? It puts both students and teachers in very awkward positions. No, I didn’t mean it that way, gosh!

For the teacher, talking to a group of 12 and 13-year-olds about sex is tricky. How detailed should you be, what examples should you use, and let’s not forget surviving the cheeky comments and giggles in the background… I give props to teachers who finish sex-ed classes without turning red.

I do want to point out that it’s an adult’s responsibility to teach safe sex and how our reproductive systems work, though. We just wish that it wasn’t so awkward!

Also, it’s no secret that most students aren’t ecstatic about sex-ed classes. This is the first time that most of them hear the name of genitalia, something we’re taught at home is a “private” part, mentioned out in the open. Even more, girls learn about all the birth control contraptions and period supplies they can and should use, while boys exchange curious glances and are maybe taught how to use a condom.

It’s almost like we are taught that it’s strictly the woman’s responsibility to protect herself during sex. That, in itself, is more than weird. It’s pretty dumb.

With most sex education classes running an hour-long, there’s simply no time to impart anything meaningful. From contraceptives to relationships, children are just not given enough time to truly understand the implications of sex. What should be taught over years is stuffed into a week or two and never spoken about again.

Until someone shows us the STD slideshow in high school.

Every year, millions of animals are dissected in elementary, middle, and high schools as children learn the basics of anatomy. Sadly, dissection is not as innocuous as it sounds. Innocent children take part in an almost cultic tradition of desecrating the bodies of small animals.

This is the most sadistic norm ever!

Don’t get me wrong, dissections are important for science, but they are just gross. If a child is not aspiring to be a veterinarian or surgeon, experiencing the trauma of dissections is unfortunate. While compassionate teachers may excuse students from participating in the experience, the fact that we learn cutting open a dead animal is acceptable is worrying.

Decapitation and dismembering should never be a normalized practice.

Animals don’t deserve to suffer for a one-time educational demonstration. We have pictures, books, videos, and the internet for learning everything we need to know.

5 Recorders are the Most Useless Instrument

Learning how to play a recorder is one of the most memorable “musical” experiences for most kids. But not because we were recorder prodigies. Yes, they are easy for small hands, and yes, it’s a way to teach someone how to read music. But all cards on the table, it was just an excuse to force kids to sign up for music classes.

As far as woodwind musical instruments go, recorders are dirt cheap. For many schools, they are the best instruments for a music class lesson. But while teachers might profess that the recorder is a gateway to other instruments, their parents may disagree. The only thing that recorders accomplish is making kids noisy and irritating as they try their short-lived stints as musicians.

And if you think about it, do you actually know someone who went on to become a great recorder artist?

A while back, the United States government had a wonderful idea to educate kids on the ills of drug abuse. The Drug Abuse Resistance Education (D.A.R.E.) program encouraged kids to “just say no to drugs.” Thanks, Nancy Regan.

The sad thing is, the program wasn’t always effective.

The D.A.R.E. program used law enforcement officers as spokespeople who visited schools to teach about drugs. Kids were not always ready for the program, and it might have caused more harm than good. For example, some of us learned the different street names of drugs, where to get them, and how much they cost. It inadvertently made us interested in these drugs and seek them out.

A better approach would have been a program that taught kids how to actually say no to drugs and targeting the negative effects of opioids and prescription narcotics. I guess hindsight is 20/20?

3 Teaching A Different Version Of History

While history is how we learn about the past, we twist the truth every now and then. But that’s okay, as long as it’s part of the approved curriculum, right? Umm no. American history books are no stranger to controversy and when it comes to altered history, they might be just a little too fictitious.

One of the biggest lies and perhaps most controversial examples is that of Christopher Columbus, the explorer who ‘discovered’ America. Schools taught that Columbus discovered America (specifically the “New” World) in 1492, a recognition that robs some very worthy people of their credit. We also don’t teach that he was an awful navigator.

First, Columbus never landed in North America. He only stumbled on the Caribbean Islands and later explored Central and South American coasts. Second, Columbus was only searching for a route from Europe to China when his shortcut landed him on land. Third, America was home to indigenous tribes, and Vikings had traveled to America as early as the 10th century.

2 Grades Are More Important Than Learning

Schools are where we learn how to live in our world, but some lessons destroy us rather than help us. In most schools, children are taught to sacrifice everything—fun, friends, hobbies, sleep—for a grade. These harmful patterns discourage legitimate learning and comprehension.

For example, students resort to serious cramming a few days before tests to ensure they pass with flying colors. Cramming isn’t meant for long-lasting learning. It’s meant for test-taking. Also, some students resort to cheating to achieve a grade that will help them advance to the next stage. The school system undermines real learning, which hurts children as they grow up (thanks, No Child Left Behind).

These habits taught in schools are weird and might be the reason our society faces so many problems. Everyone is trying to become number one and it’s toxic. Maybe the world would be a little more chill if we taught kids to pause and understand each other rather than compete all the time.

I know what you’re thinking. Is caring for an egg a weird enough one for this list? Heck, yeah. Caring for the ‘egg baby’ was probably the strangest project in sex ed that everyone looked forward to. You draw a face on your egg, glue on some hair, give it a name… it’s hilarious! And if you break it, well, your egg baby dies. But there are no real-life consequences this other than a lower grade.

Let’s face it. No matter what your health teacher says, an egg is not an actual baby.

For starters, an egg doesn’t cry. An egg doesn’t poop. An egg doesn’t struggle to go to sleep. Technically, it teaches students how to responsibly care for hard-boiled breakfast food, but it’s nowhere near as impactful as taking your own newborn home from the hospital or even babysitting somebody else’s egg-headed toddler. It’s just not the same.