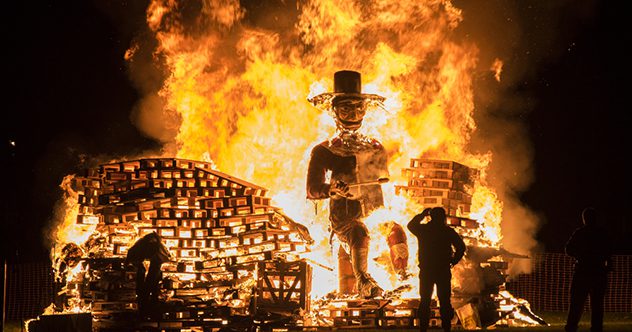 Well, this quirky little superstition is nothing compared with the entries in this list—people all over the world still engage in some pretty extreme, gruesome and downright bizarre behaviour simply because that’s what has been done for generations. From throwing babies from great heights to trying to high-five venomous snakes, faith is still a great motivator. And, sometimes, deranging.

Moe Syzlak’s faith of choice is a real, living and breathing religious movement. If you love Jesus enough, so the Snake Handlers believe, you won’t get bitten. Not figuratively, they handle venomous snakes. The Bible does seem to hold a justification for the practice, if you squint tightly enough as you read the passages from the gospels of Mark (16: 17-18) and Luke (10: 19) and squeeze an air-horn whenever any pesky theologians decide to question the validity of the practice.

Mainly practiced by off-shoots of the Holiness, Pentecostal, Charismatic and other minor evangelical churches in the Appalachian Mountains, members used to participate in the laying on of hands to heal the sick, speaking in tongues and consumption of strychnine, relying on faith not to die of the effects of drinking the powerful poison (plenty of people died during the last practice). But it is the snake handling that has cost the most lives—as many as 120 deaths since 1910, with around 35 people dying between 1936 and 1973.
Even when snake handlers don’t die when bitten, plenty of parishioners in these churches display atrophied hands and missing digits.

But, at the very least, when a snake handler dies, believers don’t think it was due to a lack of faith—it was simply in God’s plan. 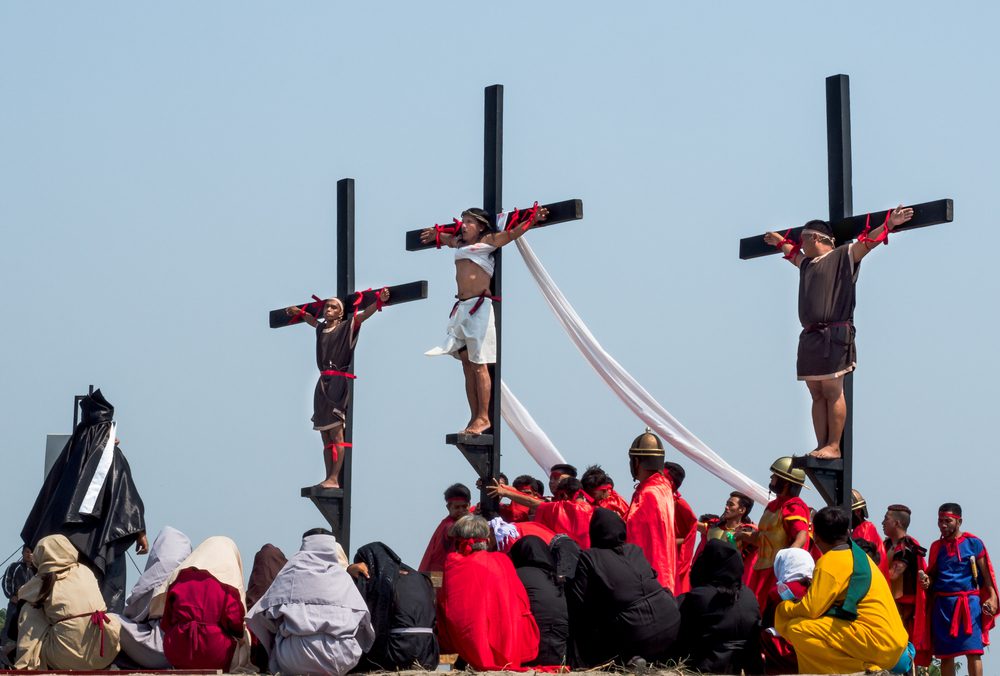 This practice definitely is in the Bible (somewhere near the back, I think). Not sure it was ever suggested as something Christians should do, however. According to some Filipino Christians, that’s nonsense! They allow themselves to be crucified. Not in the silly Easter passion play way with leather straps over their wrists for 20 minutes, either. They actually get properly nailed to some planks of wood.

Catholic leaders have condemned the practice, worried that someone might get hurt (!) Although it’s clearly dangerous, one must admit that it’s an impressive show of faith, as well as an incredible display of endurance and dealing with what is clearly excruciating pain. In 2019, 9 people at 3 different sites across The Philippines were nailed to crosses to celebrate Easter. I think I’ll stick to egg hunting and hot crossed buns. Meanwhile, in Greece… 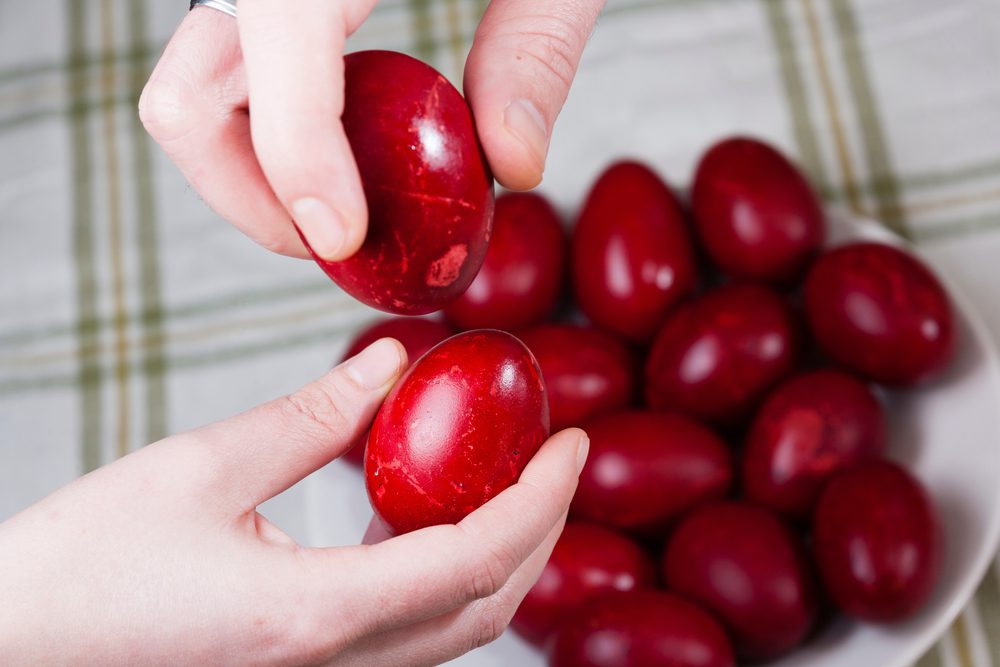 Let’s take a break from the more extreme rituals for a moment. This fun little Easter game is a staple at dinner tables all over Greece and across the Greek Diaspora. The ‘Red Egg Game’ is a fun, sometimes tense party game played. Eggs are painted red to symbolise the blood Christ shed upon the cross and placed in a basket. Then the fun begins.

According to Select Bakery’s website (a traditional Greek bakery in Toronto, Canada) the rules of the game are thus:
1. Each player selects a red egg and finds an opponent. (Usually the person sitting next to them)
2. One person says, “Christos Anesti” (Christ has risen)… and the other replies, “Alithos Anesti” (Indeed He has risen).
3. The person who said “Christos Anesti” taps the end of his or her egg lightly against the end of the opponent’s egg. (The goal is to crack the opponent’s egg.)
4. When one end is cracked, the winner uses the same end to try and crack the other end of the opponent’s egg.
5. The winner with the unbroken egg then challenges another person and so on around the Easter dinner table until one person remains with an unbroken egg.
6. The player who successfully cracks the eggs of the other players is declared the winner and is said, will have good luck during the year.

From egg-cracking to (hopefully) avoiding some baby-cracking. It is considered a portent of great luck for your new infant should it complete a 30-ft plunge from a roof. This ritual is still popular in parts of Karnataka and Maharashtra states in India.

In the city of Solapur, the ritual is completed from atop the Baba Umer Dargha, an Islamic shrine. The tots are flung from a platform 15 meters above the ground and (hopefully) caught in a cloth held below. The tradition is said to date back to a suggestion made by a Sufi mystic who, on hearing about the rise in infant deaths, suggested that ailing babies be thrown in the manner still practiced today. This, he claimed, would show “their trust in the Almighty”. He further suggested that: “the babies were miraculously cradled to safety in a hammock-like sheet that appeared in mid-air.” Today, instead of a randomly materialising cloth, it is brought to the foot of the shrine and held by both Muslim and Hindu men.

“Remember, remember the fifth of November. Gunpowder, treason and plot” is a little rhyme you’ll hear around Britain on ‘Bonfire Night’ before we all head out to let off fireworks. Another tradition on this day is for children to go door to door holding a crudely made scarecrow-looking effigy and ask: ‘Penny for the Guy?’ (the ‘Guy’ is the effigy, not some random man who may be skulking behind the kids), before the community assembles at a predetermined location and sit the Guy on top of a pile of wood and set it ablaze. It’s pretty awful when you spell it out like that.

The ‘Guy’ is a representation of Guy (or Guido) Fawkes, a Catholic conspirator who planned the so-called gunpowder plot along with 12 other men—they plotted to blow up the House of Lords during the Opening of Parliament ceremony, killing King James I, (many non-Catholic monarchs had plots hatched against them during this period—King Henry III was assassinated by a Catholic fanatic in 1589, 16 years before the gunpowder plot). The plot was uncovered before it could be executed, and the conspirators were killed. So that’s why, every year, the people of Britain ceremonially burn Guy Fawkes.

That’s a long time to hold a grudge!

5 Knot Tying and Untying. And tying. And Untying – Zoroastrianism, worldwide.

The Boy Scouts have a pretty good reputation for knot tying. So too does the Navy. But none of these people can hold a candle to certain Zoroastrians. These guys take knot tying and untying to another level—a transcendent level!

The traditional Kushti (formerly known as a ‘zonnar’) is a sacred girdle made from tightly wound white woollen strands. It is worn around the waist by devoted Zoroastrians, wound 3 times around, tied twice employing double knots at the front and the back, and left to hang on the back. The 72 separate strands represent the 72 chapters of the ‘Yasna’, the main liturgical works found in the ‘Avesta’ (the Zoroastrian equivalent of the Bible). If this doesn’t sound complex enough, the daily ritual, known as the Nirang-i Kushti, that’s performed using this garment is intense: the adherent must stand in one spot, facing the sun or a light source, untie and then re-tie the Kushti in complete silence. If the adherent is compelled to speak, the ritual must be started over. Plus, you have to do this at least 3 times a day! Priests, at least 5 times.

I’m sure that many young Zoroastrians have the sorts of mothers that call up from downstairs “Where did you leave the remote” in the middle of the Nirang-i Kushti, prompting an answer. Probably followed by a “Never mind, it was on your dad’s belly!”. 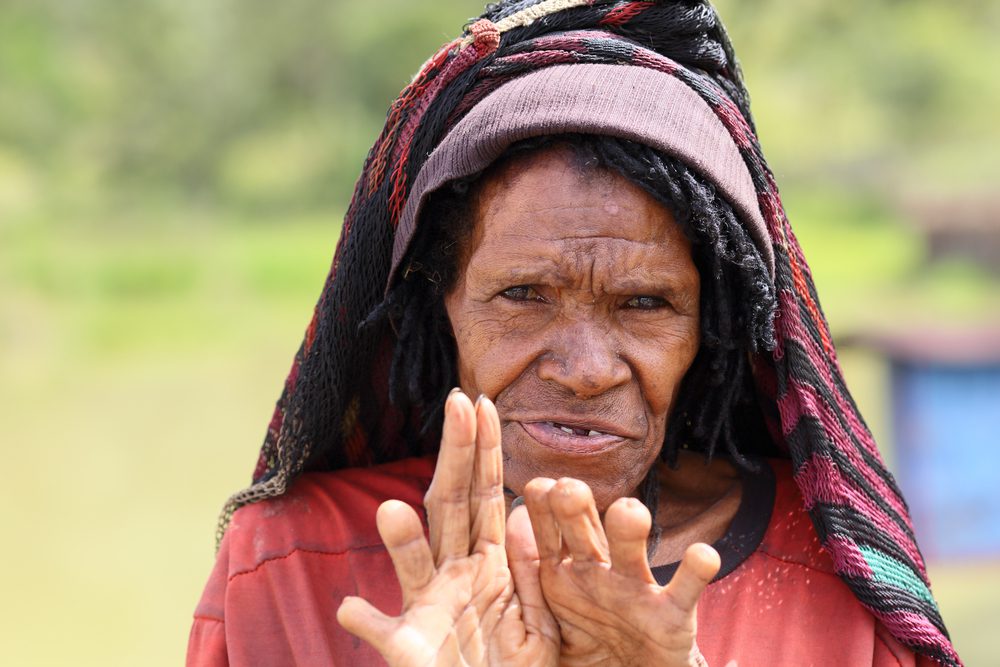 They say that losing a loved one can be like losing a piece of yourself. For women in the Dani tribe on the Indonesian island of Papua, this sentiment is taken quite literally.

Women who suffer a bereavement were once required to amputate the ends of their fingers – for both the spiritual representation of their grief and to ward of the potentially vengeful spirits of the deceased. In times past, even small babies were required to have fingertips removed, often bitten off by their mothers (older, voluntary women have their fingers cut off by a relative using a sharpened stone blade). Now this ritual has been made illegal, but rumours persist that the remote tribe continue anyway. Many Dani women seem to be suspiciously lacking in digits. 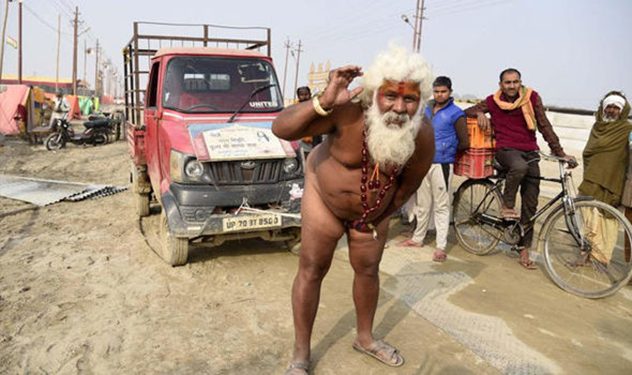 “Respect the cock!” shouteded Tom Cruise’s charismatic motivational speaker character in the movie Magnolia. Some people around the globe take this quite literally!

Whereas the Japanese take this suggestion in the abstract, having a whole Shinto festival dedicated to the concept of the penis called the Kanamara Matsuri, held each Spring in Tokyo; but in India, a certain holy man garnered respect due to the power of his own one-eyed trouser snake.

Well, at least one guy did back in 2018. The man was a Sadhu, an itinerant Hindu holy man who rejects earthly comforts, accepting the hardships of life as a test of his spirituality. Well-trained in yoga and meditation, these men are known to wear very little or nothing at all, relying on the kindness (and probably awe) of strangers to get by. Plus, the occasional stunt like pulling a small truck with a rope tied to your cock is bound to get a few coins thrown your way. Wonder if these Hindu holy men have ever considered OnlyFans?

Being the only place in the world that eschews GDP as a measure of the nation’s overall health by repying on a ‘happiness index’, one must question how ‘happy’ people are that the so-called ‘Night Hunting’, commonly referred to as ‘Bomena’ in Bhutanese, continues in the easternmost parts of the country. Author and researcher on Bhutanese culture Dorji Penjore wrote that, “this courtship involves a boy stealthily entering a girl’s house at night for courtship or coitus with or without prior consultation… (Bomena) is an institution through which young people find their partners and get married… Ideally, the process culminates in the morning, with what is locally called jai da jong (meaning ‘coming to the surface’) when the boy is found on the girl’s bed, which is an indication to declare them husband and wife”

With the advent of social media, it seems that this ritual may be a thing of the past. With claims from some that Bonema is responsible for increases in STD transmission, unwanted pregnancy, fathers abandoning their children and many cases of rape, maybe this is one tradition that Tinder will be a better mechanism for the… oh.

You want to grow up and be a real bro? If you are a member of the Hamer tribe of Ethiopia, you better go find a dickless bull, strip off and do some stretches for a spot of jumping (I’m sure kangaroo boots are verboten).

But what does it mean to the Hamer when we say, ‘to be a man?’ Put simply, you’ll be allowed to marry. A massive party is arranged for the event, drinking and dancing all day until sunset. Then, the boy will try to run over the bull’s back 4 times without falling. If he face-plants every time, he must remain a boy for another year before getting another go.

So, if you find yourself living as an adopted son amongst the Hamer people, you’d better hope to pass this tricky test. Unless you want a life as a South-western Ethiopian tribal bachelor-for-life, that is.