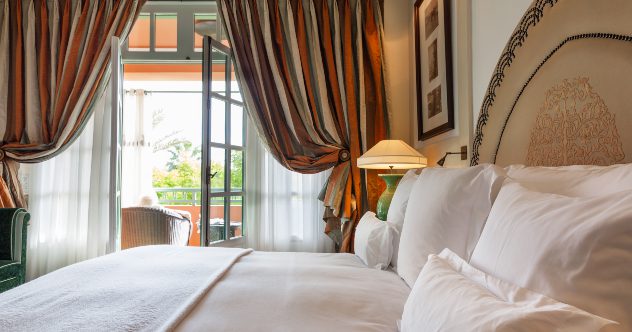 For the ultra-wealthy, money is no object. Instead, it’s many objects: golden mammoth skeletons, rooftop pools full of Patron, and jetpacks for their butlers (I assume). But when the one-percenters inevitably get sick of soaking in their own opulence, they vacation in search of fresh, new luxuries at the finest resorts in the world. Luckily, there are hundreds to choose from, each with its own creme-de-la-creme top-tier penthouse/villa/island. These rooms are the finest, or at least priciest, available anywhere in the world. This list ranks the ten most expensive of these super-suites, rooms whose price per night will make you question if that golden mammoth skeleton might actually be real. Spoiler: it is.

Many Las Vegas resorts, especially those right on the Strip, are massive testaments to human engineering and commerce. They’re big, bright, and tower over the street-level neon. The Nobu Hotel, however, exercises more restraint, with only 182 rooms and a consistently austere and beautiful aesthetic.

For $35,000 per night, guests can stay at the hotel’s finest suite, the Nobu Villa. It boasts 10,500 square feet, a personal butler, masseuse, limo, and 24/7 access to world-class food from celebrity chef (and hotel owner) Nobu Matsuhisa. It also has a full bar, its own barbecue pit on its terrace, and a whirlpool. The whole place rides the line between opulence and elegant simplicity, a line that most other entries on this list fall far away from.

The Grand Resort Lagonissi is located south of Athens, Greece, on its own mini peninsula that juts into the Aegean Sea. The resort is worth its cost from location alone; its unobstructed view of the Mediterranean and a dozen of the Greek islands that peek their heads out of it is breathtaking. It’s also breathtaking that its nicest room(s), the Royal Villa, costs $40,000 per night.

For the price, guests stay at a villa “designed for royal and prestigious guests.” It shows. The villa is a three-bedroom, three-bath, private gym, private massage parlor, indoor pool, and outdoor pool affair. Best of all: it has its own butler’s quarters with a separate entrance. That way, you can be waited on hand and foot and then shoo that unsightly commoner away so you can again forget that the lower class exists.

The Four Seasons New York stands right at the heart of downtown Manhattan. Between Madison and Park Avenues, the hotel is a short walk to dozens of major New York City landmarks, and from its Ty Warner Penthouse, you can see them all out of your many gold-trimmed bay windows.

The room was designed by probably the most celebrated architect of all time, I.M. Pei, and he was not phoning it in that day. Or should I say year, as it took Pei seven whole years to design the suite. He made every nook and cranny extravagant and expensive; even the sheets boast 22-carat gold fabric. Through its gold telescope, you can look out on Central Park and the rest of the city, swirling a snifter of brandy, and know you’ve won the game of life.

The Penthouse Suite at Faena Hotel is every bit as luxurious as you’d imagine from a $50,000 per night suite. But unlike the other hotel room entries on this list, the suite is located in Miami, and boy does it show.

The architecture is all art deco; at every opportunity, every structure is maximal. Chairs and couches are tiger print and gold, a golden greyhound statue guards the leopard print living room, and every inch that could be gold-leafed is. The entrance to the building hosts a Damien Hirst art piece entitled “Gone but not Forgotten” that is, in fact… a golden wooly mammoth skeleton.

Though it’s not the most expensive stay on this list, Laucala Island sure feels the least like real life. Red Bull CEO Dietrich Mateschitz owns the island, and he keeps it, aesthetically at least, a paradise.

There is no spot on the private island where the grass isn’t perfectly green, the water isn’t crystal blue, or where tall palm trees jut out from expertly manicured gardens. The appropriately-named Hilltop Villa is at the top of that pristine island, which costs $50,000 per night. It comes with a chauffeur, a nanny, an entire kitchen staff, and even your own horses to ride on your own strip of beach.

If staying on a hill atop a private island that may house a couple of dozen other elites isn’t private enough for you, there is always Cheval Blanc Randheli, where guests can rent an entire island to themselves for only $50,000 per night.

Located in the Maldives amidst a coral reef, the hotel is as tropical and picturesque as can be. The private island is even better, as there is not another soul to distract you or obstruct your view. That is, aside from an entire team of personal chefs, bartenders, and even your own private pianist.

You’re probably thinking, “Wait, there are four more rooms after the private island? How?” The answer: absurd, King-Midas-level opulence. Located on the south coast of France in Cannes, the Hotel Martinez looks out over the French Riviera, so it’s not lightly that I say that the hotel itself might be the better view.

The hotel is perfectly designed and furnished throughout, but the Penthouse Suite, located on the top floor and with its own private terrace, is the pinnacle of taste. The bedroom, living room, dining room, and even the closet manage to be stylish and yet relaxing. The closet is even put together well enough that it pulls off a leopard print carpet. Celebrities stay here during the Cannes Film Festival and enjoy its private, two-Michelin-starred restaurant, the La Palme d’Or, costing them $55,000 per night.

The suite is over 10,000 square feet, and its private terrace alone is 2,500. The living room is the size of a full grand ballroom, the ceilings are 26-feet high (which many New Yorkers would gasp at), and even the entryway is over 30-feet across. Not to be a one-trick pony, the suite is also lavishly decorated with 100% unique furniture pieces across its two full floors. To enjoy that much space and style while overlooking Central Park, guests pay $75,000 per night.

The Hotel President Wilson is located in Geneva, Switzerland, and offers views of both Lake Geneva and Mont Blanc. The views are best from the hotel’s top floor, the entirety of which is dedicated to the Royal Penthouse Suite.

The insanely decadent suite has 12 bedrooms and 12 bathrooms, one of which boasts a jacuzzi with a panoramic view of the lake. The suite also contains a massive, 103-inch television, as well as a full grand piano. At $80,000 per night, the room is not even marketed primarily to celebrities but rather heads of state and royalty.

The most ridiculously expensive hotel suite in the world is *drumroll please* the Empathy Suite at the Palms Casino in Las Vegas. It costs a staggering $100,000 a night, and in exchange, offers some particularly unique luxuries.

Damien Hirst designed the room and applied his special brand of eccentricity to the decor. Two white sharks hang by one of the windows, preserved in formaldehyde and prompting a few reasonable questions. There is an impressive 13-seater bar, for some reason made from a collage of faux medical waste. The medical theme continues with pill wallpaper and window stickers, then gives way to the other two themes: polka dots and butterflies. There’s a lot of luxury to experience in the suite, but ultimately it’s the design that steals the focus. For better or worse.

The magnificent and mysterious Boulevard Penthouses at The Cosmopolitan of Las Vegas get an honorable mention for being both the most expensive rooms in the world and the cheapest- all depending on how you slice it.

For the highest spending gamblers at the Cosmopolitan Casino, the Penthouses are gratis perks, making them the cheapest hotel rooms in the world. But to earn that posh prize, those big spenders need to guarantee cumulative bets of at least one million dollars on the casino floor. Thus we have the most expensive hotel room in the world. Sort of. And is it worth it? It would be hard to argue any room could be worth a million dollars, but the Cosmo Penthouses try their hardest. The rooms look like sets from a utopian sci-fi movie; every surface is clean, sleek, minimal, neutral, and functional. And as you could likely guess, gold is everywhere.