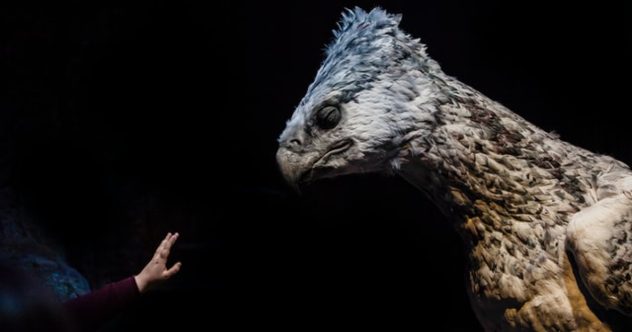 Every culture in history has created its own bestiary of otherworldly and mythical creatures. And the deeper you get into mythology, the weirder the monsters are. From the giant to the tiny, the ethereal to the subterranean, the sagely to the fiendish, if you can imagine it, it most likely exists in lore. Except we have good reason to believe that people didn’t imagine them—at least not entirely. Many myths and cryptids have their basis in real-world animals, natural phenomena, and even other people. Here are ten such mythical creatures that mix unreality with at least a touch of reality.

Unicorns are one of the most famous mythical animals; somehow, every two-year-old can name the magical, horned equines. They’ve also been around in various tales for 4,000 years across parts of Europe and Asia. One of the earliest examples of unicorns comes from the Greek historian Ctesias, who wrote of unicorns as animals native to Eastern Europe and the Middle East. Maybe it’s not a coincidence, then, that actual unicorns used to exist—in Eastern Europe and the Middle East.

Elasmotherium was an ancient genus of rhino whose most notable features were its shaggy covering of hair and its one long horn jutting straight out of its forehead. Further, compared to modern rhinos, its legs were longer and its teeth more horse-like. Early people who came across its skeleton, possibly well-preserved from its then-frigid habitat, would be perfectly logical in assuming that they had just found the remains of a horned horse, a unicorn.

9 The Hydra Was a Mutant Snake

Snakes and related reptiles like lizards and turtles are sometimes born with a condition known as polycephaly, which, as its name suggests, means having more than one head. Though almost any organism with a head can be born with the disorder, it is more common in snakes. It is even more common in warmer environments, like, for example, the Mediterranean heat of Greece.

If an ancient Greek were to find one of these multi-headed snakes, all it would take is a flair for the dramatic for that odd-looking reptile to become the terrifying Hydra. Were the Greeks known for their drama? Say, where does the word drama come from, anyhow?

Vampires are tricky myths because, unlike the simple horse-with-a-horn unicorns, vampires have a slew of different abilities, both natural and seemingly supernatural. It would seem hard to anchor them in real beings and phenomena. However, most of the vampire’s key traits are easily explained, almost always by medieval European ignorance.

Undeath? Coffins were exhumed with scratch marks on the inside lid for hundreds of years due to premature burial. Gauntness and fangs? Decomposition thins the body and recedes the gums, jutting the teeth out more than living sets. Aversion to sunlight? There are dozens of disorders that cause the symptom, like lupus, albinism, photophobia, and even concussions. Hyper aggression, hypersexuality, and association with wolves and bats? Rabies ticks a lot of vampiric boxes, which leads to the next point, namely that…

7 Werewolves Are Scientific Ignorance Too

Werewolves have become intrinsically linked with vampires in modern mythology, but the two have even deeper connections due to their overlapping origins.

Like vampires, rabies is a common theory for the animalistic behavior associated with werewolves and could actually come from a wolf bite. Porphyria is another common suggestion, as it often leads to aggression, aversion to light (even nocturnality), and even the combination of receding gums and reddened teeth—which together could look a lot like fangs. Then there is the condition known as werewolf syndrome, hypertrichosis, which causes hair to cover most of the body. As improbable as it would be for the two to cooccur, a person born with hypertrichosis who contracted rabies would be the spitting (and foaming) image of a werewolf.

6 Sirens and Mermaids Are Manatees

We’ve established that people in the middle ages were liable to misinterpret what they didn’t understand. But imagine how much worse these people would be after months at sea—hungry, thirsty, and particularly starved of the, ahem, opposite sex. That’s a big reason why modern mermaid myths exist.

Manatees, dugongs, seals, and sea lions are all near to a person’s size and all terminate in a large, broad, sideways-spanning tail. A sighting of one descending into the water with only tail raised would be an easy misinterpretation. It’s especially interesting that mermaids, despite being considered half-fish, seem to always be depicted with the same sideways-spanning tail that only aquatic mammals have.

The giant oarfish is terrifying—I mean, the longest bony fish in the world confirmed to reach 26 feet and reported to reach twice that amount. Its long, sinewy body is topped with an equally long webbed fin, and from its snakelike head dangle whisker-like tendrils. All of these are features of the generic sea serpent, and thus the connection is clear.

The earliest descriptions of sea serpents, often called sea worms, consistently include manes or fins on their heads and neck, just like the oarfish. Though oarfish are known to spend most of their time in the deep pelagic zone of the ocean, they make occasional sojourns up to the surface. Catching sight of their unparalleled length, with fin cresting the surface and chin tendrils trailing behind them, even today, might make anyone think for a second: sea monster.

Chupacabras, the goat-suckers of Mexican folklore, are fairly unique among modern cryptids in that supposed carcasses of the beasts turn up repeatedly. Unlike Loch Ness or the Mothman, supposed Chupacabras are available for study and inevitable debunking regularly. That’s why the real basis for Chupacabra sightings is pretty much set in stone: coyotes with mange and scabies.

Nearly every body turned in has been the same—a coyote or coywolf with a severe reaction to the mite Sarcoptes scabiei, common and relatively non-threatening to humans but rare and dangerous to coyotes. The mites cause mange and scabies, causing the coyotes’ hair to fall out, their skin to shrivel, and another interesting symptom. Mange debilitates the animal with fatigue and pain, forcing it to seek out easier prey, which often means livestock. Goatsucker, indeed.

Kappas are river-dwelling imps from Japanese folklore. You may also know them from Teenage Mutant Ninja Turtles III, which contains the dazzling dialogue from Michelangelo: “Kappa? Cappuccino?!” They are said to be the size of a dog or child. They’re dark, slimy, with webbed hands and feet, broad heads, and broad, almost turtle-like backs. Of course, this describes another creature that also makes its home in the rivers and ponds of Japan: the Japanese giant salamander.

The Japanese giant salamander takes the cake as one of the largest amphibians in the world, growing to more than five feet long and 60 pounds. It is truly an off-putting and startling sight for anyone. The vast majority of all amphibians in the world are restricted to under a foot in length. People believe that ancient Japanese fishermen and farmers would encounter the beasts rarely and misinterpret them as river demons, and I don’t blame them.

The cyclops is one of Greek mythology’s most famous creatures, featuring prominently in its own chapter of the Odyssey. They are giants with the curious (and evolutionarily nonsensical) trait of having only one large, central eye. Though no living animal in the time of antiquity was likely to inspire the cyclops, one dead one very likely did.

Mammoths and mastodons, the extinct (for now…) relatives of elephants, were at one point ubiquitous. Though we tend to think of mammoths and mastodons as dwellers of the frozen north, the various species’ combined range includes just about the entire world, minus the most southern areas. And though we know them to have the two, sideways-facing eyes common to herbivores, their skulls have one large, central hole in the center front. It is a connection for the trunk, but anyone except modern biologists would see it and assume it was the socket of a large, lone, central eye.

And to ancient peoples with no knowledge of paleontology, the rest of the skeleton, almost certainly not fully articulated (because that’s very rare, despite what Jurassic Park claims), would be easily arranged to look like a giant, powerful, thick humanoid.

Bigfoot, along with his numerous counterparts across the globe, is perhaps the most famous cryptid today. It, and we should really say they, are the poster children for cryptozoology groups and paranormal researchers. They’ve captured the hearts of millions, and part of the appeal is the credibility of their existence. Sure, most people don’t truly believe they exist but ask any primatologist (including myself, a former one), and they’ll give you a dozen reasons why they absolutely could. One of those reasons is that bigfoots truly did exist at one point not too long ago.

Gigantopithecus was an ape that went extinct around 300,000 years ago (or did it…), surviving well into the period in which it would have interacted with local humans. It is only known from jaw and teeth fragments, making size estimates imperfect, but it was, in any case, huge. Height estimates range from eight to twelve feet tall and weight estimates range from 600 to 1,200 pounds—150% to 300% the size of a silverback gorilla.

A likely member of the Ponginae subfamily alongside orangutans, it would likely have looked like a giant, thick, hairy ape-man. As it stomped through the forest, our ancestors truly did see their own bigfoot. If it, or a close relative, survived to modern times in the vast, unexplored forests of the world, perhaps the bigfoot myth is the bigfoot fact.

Why A Man Lived In An Airport For 18 Years
10 Declassified Secrets of the KGB
Top 10 Famous Actors in Roles You Completely Missed
10 Most Secret Military Experiments Caught on Tape
The New Mutants Explained!