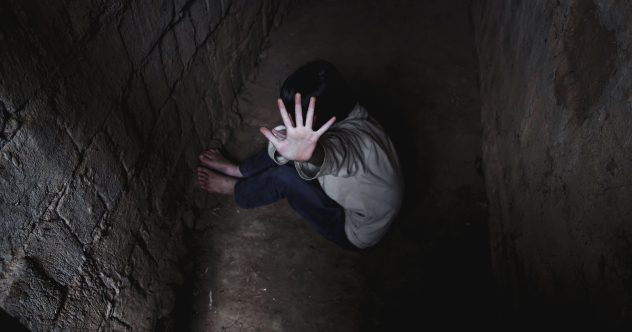 What is it about feral children that both fascinate and horrify us? On the one hand, we think of the fictional Tarzan of the jungle living high up in the forest’s canopy, swinging gracefully on vines from tree to tree. He is happy living in isolation with animals. When Tarzan is in trouble, he calls to the elephants, “aahuaaa uaaa uaaaaaaaa,” and they come running.

But then there are the real-life feral children that populate history. In many cases, they raise questions that professionals can’t answer. Like, how did they end up living with wolves? How did they survive? And most importantly, how could any parent abandon or even lose their child to the great outdoors?

If you want to talk about children who fell through the cracks, the following ten examples tackle cases of feral children.

Related: Top 10 Tales Of Children Lost In The Wilderness

10 The Wild Girl of Champagne

Rags-to-riches feral child Marie-Angélique Memmie Le Blanc was reportedly born in Wisconsin in 1712. According to Le Blanc, when she was around seven, she was painted black and sold as a slave. She was traveling with a Canadian woman to France when the ship sunk, but Le Blanc and another girl made it to shore and began living in a French forest foraging on roots, killing small animals, and eating their raw flesh.

Eventually, the two girls parted ways. One day villagers spotted Le Blanc stealing apples and sicced a bulldog on her. Le Blanc killed the dog with one blow and ran up a tree, escaping capture by swinging from branch to branch like Tarzan, disappearing back into the forest. A nobleman ordered she be captured. When she was finally caught, she emitted disturbing animal sounds.

At the time, professionals estimated her age to be between ten and eighteen years old. Unlike many feral children, Le Blanc learned to speak and became fluent in French. In the decades to come, she became a woman of influence in Paris. She met with royalty and attracted admirers the world over thanks to her exotic personal history. Marie Le Blanc died a wealthy woman in 1771.

9 Peter: The Wild Boy of Hanover

Peter’s story is another one of the earliest recorded instances of a feral child. In 1725, Peter was found living, some would say existing, in a German forest. He walked on all fours like a dog or wolf and foraged for plants to eat. When he was captured, he was handed over to a local Count for safekeeping. Peter couldn’t speak but made sounds described by locals as sounding like an orangutan. No doubt, he was looked upon as a wild fascination, not unlike an animal in a zoo.

Eventually, Peter was shipped off to England and placed under the protection of King George I. The courtiers, for a time, were fascinated by this most undomesticated soul. When they were bored of him, he was sent to live with a farm family where Peter happily spent his days repeatedly loading up a cart with animal dung and then dumping it out. Peter loved the autumn nature and would often venture into the woods to search for acorns to eat.

Sometimes, Peter traveled far during his autumn outings and didn’t know how to get back home. The kindly farmer who looked after him had a metal collar made for Peter that locked around his neck. The outside of the metal band was engraved with Peter’s name, address, and a message saying if you find Peter, please return him to this address, and you will be paid for your trouble.

Peter died in February of 1785; to this day, flowers are left on his churchyard grave.

This next feral child story unfolded in the 21st century on the island of Borneo, bordered on the northwest by the South China Sea and by the Sulu Sea on the northeast. In the jungles of Borneo, a young boy was spotted by the locals living in the wild. After two years of failed attempts, the authorities managed to capture the little boy in 2014. Doctors guessed his age to be somewhere between four and seven years old.

Amazingly, he was living with a congress of fierce orangutans who took exception to the boy being taken from them. Four of the creatures had to be subdued with tranquilizer darts before officials could grab the child. Initially, the boy was nervous, but doctors eventually won his trust. They examined him and found the child to be in surprisingly good health despite living and eating wild.

At the time of his capture, the boy exhibited no signs of human socialization. With the help of social services, this feral child began the rigorous task of learning how to live and act like a “normal” child.

In 1974, Ng Chhaidy and her male cousin, also four years old, disappeared into the jungle outside their small east Indian village on the border of Myanmar. A heavy rainstorm washed away any tracks of their travel. Five days later, Ng’s cousin was found, but there were no signs of Ng. Ng was eventually given up for dead, and the family and village moved on the best they could.

However, for decades, people talked about seeing glimpses of a woman living in the jungle. In 2012, at the age of 42, Ng Chhaidy was found living naked in a cemetery in Myanmar. She was taken in by a woman who eventually crossed paths with Ng’s father three years later and saw a family resemblance between the two. Based on Ng’s birthmark on her face and the fact she was left-handed, Ng was reunited with her father and mother, who believed their daughter had been dead for decades.

This feral child named Prava was discovered at age seven, living with his mother in a small two-bedroom apartment in Russia. In her early thirties at the time, the mother kept one room filled with cages holding the dozens of birds she owned.

Sadly, she kept her son in the same room as the birds and never spoke to him. When Prava was found, he couldn’t talk; instead, he chirped like a bird. After being rescued, if Prava grew frustrated, he flapped his arms and hands like a bird.

One of the best-documented cases of a feral child is of an eight-year-old Ukrainian girl discovered in 1991 in the farming village of Nova Blagovishchenka.

Oxana Malaya was born in 1983 but was neglected by alcoholic parents. As a result, Oxana lived and grew up amongst dogs. When she was discovered, she was living in a kennel with dogs. It’s estimated she’d been living with the dogs since age two. One night when Oxana was left outside by her parents, she sought warmth and crawled into the nearby dog kennel and curled up with the dogs. The comfort the dogs offered no doubt conveyed to the child that here, at last, was a safe place.

By the time authorities were alerted and came for Oxana, her overall behavior was extremely dog-like. She walked on her hands and feet, bared her teeth, and barked if someone came too close. She knew only two words, “yes” and “no,” but lacked the basic human skills like bathing. Instead, she groomed herself just like dogs do.

Oxana was placed in a foster facility for developmentally impaired children. It took years of both special therapy and schooling to undo the damage. Over time Oxana did learn how to speak. Today she milks cows for a living. Doctors believe that Oxana will never fully overcome her intellectual impairment.

During a 2013 interview on a Ukrainian television show, she stated that she disliked being referred to as the “dog-girl.” She just wants to be treated as a normal person. Oxana’s hopes and dreams entail seeing her brothers more often and finding her mother one day.

In many cases, authorities don’t know how children become feral. But with Sujit Kumar, it was evident what happened.

In 1978, on the island of Fiji, Sujit was found living in a chicken coop. His parents banished him to the coop due to behavioral problems. When his mother committed suicide, Sujit’s grandfather took over care of the boy but still made him live in the chicken coop. At the age of eight, Sujit was discovered one day in the middle of the road flapping and clucking like a chicken.

After being rescued, it was discovered his fingers were turned inward. During feeding time, he would peck at his food like a chicken, crouch on his chair like a chicken roosting, and communicate by making a clicking noise with his tongue.

In 1926, Reverend Singh, who ran an orphanage, published an account of being given two girls who had been rescued from wolves in Midnapore, India.

Singh reported that the girls acted like wolves. They refused to be clothed, scratched, and bit if anyone got too close. Neither of them liked cooked food, preferring raw meat eaten from a bowl placed on the ground before them. They walked around on their hands and knees, which were thick with calluses. The girls preferred night to daylight and seemed to have a heightened sense of smell and hearing. They exhibited fear but, other than that, exhibited no human emotions. They didn’t speak but at night would howl to their wolf pack.

Supposedly, Amala and Kamala were abandoned by their families and came to be mothered by a female wolf. They were described as having retreating foreheads and lower jaws that protruded, not unlike the wolf that mothered them. It should be noted that over the years, the authenticity of this story has been questioned. Amala died in September 1921, and Kamala died in November 1929.

At five, an unnamed boy from southern Chile was tossed out of his home by his abusive parents. He eventually was placed in a children’s home but two years later escaped and began living a feral life on the streets of Talcahuano with a pack of fifteen stray dogs. They would scavenge for food on the streets, but all lived in a cave on the city’s outskirts.

In 2001, when authorities were alerted to how the boy was surviving, they closed in on him. To avoid being caught, he jumped into the cold waters of the Pacific Ocean but was rescued by a policeman who dived in after him. He was filthy, dressed in dirty rags, and his hair was matted.

After a day of recovering in the hospital, professionals took the boy to another children’s home. He showed signs of depression along with signs of aggression. Although he wasn’t speaking much, he could talk intelligible words if he chose to.

This nameless feral boy was reported to be lost at the age of seven. He was reported living in a northern province of the Sahara Desert with a herd of gazelle in the 1940s.

An anthropologist traveling in the area managed to contact the boy who was surviving on grasses and roots. The boy was described as exhibiting the mannerisms of gazelles. He twitched his muscles, ears, nose, and scalp. He sniffed the air for danger and, even when sleeping, was on high alert, waking quickly by a sound.

The first attempt to capture him was by two men in a Jeep, but the boy ran. They clocked his superhuman speeds between 50 and 55mph and gauged his leaps through the air to be as high as thirteen feet.

The boy was successfully captured at age fifteen. In captivity, he ate and cried like a gazelle. He eventually escaped to freedom, and nobody knows what happened to him.

10 Weird Sci-Fi and Fantasy Musicals You Won’t Believe Existed
10 Films That Aren’t Really Based on a True Story
10 Places That Are Unexpectedly Creepy
10 Movies That Totally Changed Course Midway
The Ending of “Us” (2019) Explained!