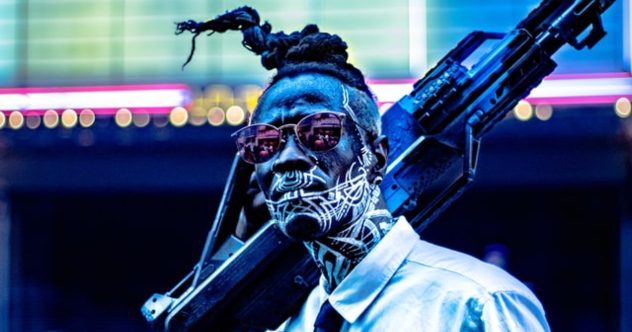 Science fiction writers love setting their stories sometime in humanity’s future. In the infinite hypothetical playground, writers are free to create any fate for our species that they want. While some are smart enough to set their stories thousands of years in the future and keep their predictions tame, some go all-in on mind-controlled Gundams fighting kaiju before Tom Holland even becomes a Spider-man. As a cheer to all the sci-fi films that invented insane and implausible futures, as well as the ones who eerily nailed it, here are ten cinematic predictions of the future that didn’t⁠—or won’t⁠—come true.

Related: 10 Intriguing Visions Of The Future From The Past

Writers built the Terminator franchise around time travel, and because of that, the movies have created many different timelines. Each timeline is as canonical and non-canonical as the next, and each is subject to complete revision when the next sequel is inevitably released. But if there’s one thing they all share, it’s a total overestimation of robotics, artificial intelligence, and the manufacturing industry.

The Terminator predicted that an advanced artificial intelligence would have become self-aware in the far-flung future of August 29th, 1997. Not only aware but powerful enough to take control of almost every electronic system in the world, operate them all at once, outthink billions of humans, and somehow manufacture an army of killer robots. And yes, humans were only able to build Skynet so early due to reverse-engineering pieces of the T-800 that were left in 1984, but a blatant predestination paradox makes for a poor excuse.

Staying in 1997, we have the bleak vision of America predicted by the 1981 movie Escape From New York. The film predicted a 400% increase in the crime rate (and by the way, not violent crime rate, just crime rate, meaning it could be littering) by 1988, which forced state and federal governments to turn Manhattan into a prison island. The sequel Escape from L.A. posited the same future, just in Los Angeles in 2013.

The problem with the future depicted in these films is twofold. First, it is wildly pessimistic, assuming that the uptick in crime in the ’80s would snowball into a violent, lawless hellscape. Second, it imagines a government that doesn’t care about things like assets, soft power, operation costs, lost revenue, or arming prisoners with a metropolis’s worth of goods and weapons. It’s eerie how chilling our fears of the future were back then. I can only imagine if a third film came out, what fears we’d see now.

2009’s Daybreakers predicted that by 2019, vampires would overrun the world. Not just hematophages, examples of which already exist within the animal kingdom, but full-on mythical vampires. Immortal, killed by sunlight, the whole Transylvanian shebang. More than that, it predicted the process would only take ten years.

It’d be easy to argue that the Daybreakers future was unrealistic due to the folkloric monsters it was based on, but really, the timeline is the bigger issue. Between 2009 and 2019, just ten years, most of the world turns from human to vampire (or vampire food). (Insert epidemiological study of vampire transmission here.) Vampires can establish vast underground roads and complexes to avoid the sun; invent, manufacture, and distribute UV-filtered cars; create large-scale human blood farms; and establish vampiric science labs. Apparently, vampires’ real superpower is their work ethic.

Blade Runner came out in 1982 and assumed that by 2019, humanity would be, well, a heck of a lot farther along than us sad sacks are. Although the setting is dystopian on the surface⁠—crowded, poor, and corrupt⁠—it implies an overall triumph of the human spirit that 2019 just wasn’t able to live up to.

Humanity has conquered the stars, has colonies across the galaxy (at least as far as Orion), and has developed genetic engineering and artificial intelligence technologies so advanced that they can create artificial beings indistinguishable from humans. And they even use the technology to recreate endangered animals. Add the flying cars and holograms, and you have a pretty different 2019.

Okay, Barb Wire deserves some credit. The film was never meant to tackle the deep questions of society and earn praise for its accuracy, yet it still got its hypothetical future fairly close. Barb Wire imagined that the U.S. would have undergone a second civil war by 2017. Though that obviously didn’t happen, the political tension in the country did reach a fever pitch.

Where Barb Wire gets it really wrong, however, is thinking that a nightclub owner in form-fitting leather bodysuits who spends hours every day on her makeup and hair would be America’s savior. I guess it may take just as long to squeeze into a leather bodysuit, too. Don’t get me wrong, it’s clear that Snake Plissken feathers his hair every now and then, but at least he’s former special forces.

Waterworld played it smart. It is set only in an unknown distant future, and even the more specific date given by its creators is still some time in the 2500s. Combined with its apocalyptic premise, it’s impossible to critique Waterworld’s predictions of technology or society. We can, however, rag on its predictions of human evolution.

In the movie, Kevin Costner was born with working gills and webbed feet. Unattractive, Costner. The last time any of our ancestors had gills was around 370 million years ago, so the number of perfectly correct mutations necessary to reactivate and repair those genes is mind-boggling. It could also be a whole new set of genes, though they would have had to evolve together, with no transitional forms (unless his parents were half mutant), and been immediately functional. That’s like two normal parents having a baby with two fully functional octopus tentacles on top of his human arms.

Stanley Kubrick’s landmark 1968 sci-fi film 2001: A Space Odyssey makes the list for one weird reason: it accurately predicted so many technologies and yet somehow couldn’t grasp a distant future without interior design from the ’60s.

The film was eerily prescient, so much so that it made people question whether or not Kubrick faked the moon landing. It predicted voice-identification, video-calling, flat-screen televisions, and tablets. It even predicted Russian/U.S. cooperation on a space station even though the Cold War was in full swing in 1968. That makes it especially odd that everyone in the movie apparently uses the same tailor, hairstylist, and makeup artist as Austin Powers.

Star Trek chose the sensible option and set its main stories in the 2200s and 2300s. Almost anything is plausible with 300 years to work on it. On top of that, the imagined technologies in Star Trek have inspired actual technological innovations, making them more plausible every year. But the Trek universe also filled in a lot of history before the 2200s, and it didn’t all quite shake out.

The best example comes in Star Trek II: The Wrath Of Khan (1982), which makes it clear that the 1990s would see the Eugenics Wars, followed by genetically engineered super-people like Khan taking over most of the planet. The closest we’ve to that since the ’90s is The Rock’s meteoric rise to stardom.

The first Mad Max predicted a Gulf war in the ’80s (so far so good) that would cause fluctuations in oil production (still good) and cause social and economic turmoil (nailed it). Then it kept going. The whole world is subject to a disastrous financial crisis, many world governments collapse, others declare martial law, and eventually, this all leads to global nuclear war. (We still have time for this to play out, by the way.)

All of this is caused by a lack of oil. Whether that’s realistic or not, what is firmly unrealistic is how everyone in every Mad Max is so wasteful with oil, even spraying it around in celebration, despite it being the world’s most precious commodity. Gasoline, now called Guzzolene, is poured on people’s heads, spit into engines, and burned to make a guitar into a guitar-flamethrower. Then again, human stupidity is not that unrealistic.

Snowpiercer imagines a 2014 where the entire globe is subject to a new ice age, with only a few surviving humans, most subjected to runaway elitism and cruelty. Aside from the 2014 part, that sounds pretty plausible. What makes the Snowpiercer future so unlikely is that its apocalypse arose from governments caring far too much about climate change.

The ice age in Snowpiercer was caused by the world’s governments uniting against the threat of global climate change, putting their best scientists to the task of fixing it, and creating a large-scale stratospheric aerosol spray to dim the sun’s rays. All by 2014. The cricket-eating makes sense. The world-length train tracks are fine. But the idea that humanity would unite for the common good and try their best at fixing the planet by 2014 is the most implausible thing on this list.