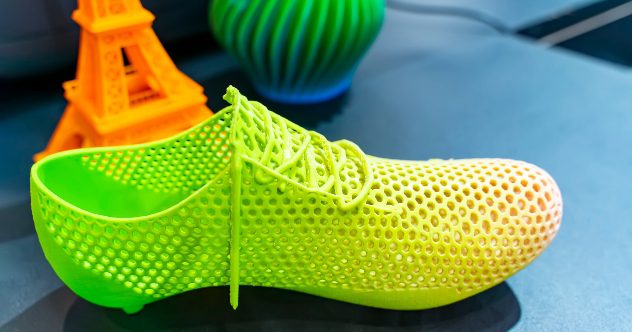 3-D printing has come wildly far in the last decade. In the aughts, commercial 3-D printers mostly made monochrome plastic baubles that only ever sat on your desk as conversation pieces. Modern 3-D printers can now print the baubles, the desk they sit on, the house that holds the desk, and even half of the person operating the printer.

We are fast approaching a point where the only thing limiting the capabilities of 3-D printers is the human imagination, and as you are certainly aware by now, the human imagination gets pretty eccentric. From the good to the bad and the very ugly (including some that defy all categorization), this list gathers ten of the most bizarre things ever 3-D printed…so far!

One use of 3-D printing may be a surprise to you. There is a company in Russia that can 3-D print unborn babies. Sounds like science fiction, right? But, there is no fiction here, just science! Embryo 3-D (a Russian company founded by scientist Ivin Gridin) has developed 3-D printing technology that allows your unborn child to be reproduced.

These 3-D printings are created from prenatal images and are usually made from plastic and plaster. However, metal printings are also available (for an additional cost). While this may seem somewhat odd, many expecting parents are excited about this idea because it allows them to hold their unborn child weeks before the birth. This can be hugely comforting to the expecting parents. While this may seem pretty unusual to some, it only makes number ten on our list.

We started small, with 3-D-printed unborn children. An increasingly big market involves 3-D printed houses! There are a wide variety of 3-D-printed buildings, including apartments, barns, houses, and even castles. They can make a 3-D-printed house in as little as 24 hours. 3-D printed homes can also be significantly less expensive to build than a traditional house.

There’s a company named Winsun specializing in 3-D printing a wide variety of houses. Winsun, and companies like it, typically do not print these structures in one piece. Instead, the parts are printed and then assembled at the desired construction site.

In addition to being very cool, the practice of 3-D printing homes can have a substantial economic benefit for those struggling with poverty. Winsun already has plans to 3-D print homes in an impoverished area of El Salvador. There is also currently a 3-D-printed neighborhood in Mexico where families live for about three dollars a day (according to The New York Times). You can expect to see more and more 3-D printed homes as the technology continues to improve at a rapid pace.

Homebuyers could even have an active hand in designing and customizing their 3-D-printed home. In a few years, a 3-D-printed house, neighborhood, or even skyscraper might not seem bizarre at all.

What would you print if you could print anything on a 3-D printer? How about another 3-D printer? Believe it or not, you actually can…with some exceptions.

Self-replication is possible only for plastic 3-D printers, not ceramic, metal, or other varieties. As with most 3-D printing, it’s all about the details and the components. A 3-D printer can have over 100 parts, so they have to all be printed to exact specifications. In order to print a 3-D printer, you must print each piece individually and then assemble them correctly.

However, a plastic 3-D printer can only print plastic, so you’d need to find (or print) the other parts for your printer in another way. A company named RepRap created the first “self-replicating” 3-D printer all the way back in 2008 (although it was only 50% replicated parts at the time). Since that time, RepRap has increased the percentage significantly, to 73%. The original RepRap machines even have “children” and “grandchildren” around the globe. It’s not hard to imagine a fully self-replicating 3-D printer in the future.

With every tech generation release, hardware becomes less expensive and more available. As 3-D printing technology has continued to evolve, so have its uses. Just like the camera, computers, film, and other new technologies throughout history, 3-D printers have opened doors for creativity and expression.

3-D printers can be used to create all manner of sculptures, and artists are able to create figures smaller than the eye of a needle. There are currently many 3-D printer artists exploring this new creative space, such as Kevin Mack, Tomoko Nagao, Batsheba Grossman, and so many more. Tomoko Nagao is an inspiring example who reinterprets masterpieces from the Renaissance era. As with many new art forms, the products can be both beautiful and bizarre to behold.

Like something right out of Q’s lab in a James Bond film, 3-D printers have some undercover capabilities. They’re able to print extremely small parts with incredible accuracy. This has many uses, including microprinting (very small printing) cameras for drones.

A 3-D printed micro-camera is able to see extremely far-off objects with great detail. Along with general drone technology, these cameras have advanced to the point where they have eagle eye vision (they’re able to see as well as an eagle). Not just useful for MI6, these tiny cameras and even tinier lenses printed from 3-D printers serve many other functions. Think about what these babies could do for medical procedures, telescopic or microscopic technology, and even vision.

5 Pizza and Food of All Kinds

The next item on our list is especially out there. 3-D printers can print food!

Back in 2016, a London company created a pop-up restaurant called Food Ink. The restaurant was only open for about three days but had a huge impact. Food Ink printed hummus, cheese, chocolate, and even the furniture at their short-lived restaurant. These are just some of the many food items that can actually be printed.

Another company, XYZ printing, has had their 3-D printers producing pizza, along with cookies, toast, cake, and more (all on a device priced around $2000). According to people who’ve tried it, the food is delicious. It’s mind-blowing. We wouldn’t be surprised to see a Food Network reality show on 3-D baking next Christmas.

“I’m writing you a prescription for filament.”

In the medical field, 3-D printing has made some really compelling developments. Scientists are currently able to print organs from medical scans. The organs are often used by doctors and nurses for training purposes. Once the organs are printed, they’re manipulated to have the same consistency and color as a typical organ. This will be hugely beneficial for training in the medical industry going forward. And functional human organs could be 3-D printed more often in the future.

Transplants, though, are seen as considerably more difficult. Nearly one-third of patients die waiting for life-saving organs. At this point, the only successful 3-D-printed organ donation into a human is a bladder. For a 3-D-printed organ to work successfully, the organ should be formed from tissue from the patient’s organ. Still, speed, customization, and efficiency could be three major advantages to using 3-D-printed organs down the line.

If you didn’t already feel like we were in a twilight zone episode, you will now. 3-D printing can create robots. As mentioned above, 3-D printers are excellent for producing small and extremely complex parts. Robots are made up almost entirely of these kinds of components. This tech would allow you to customize your own robots, down to each part. With 3-D printers, designers can create their device from a library, finalize the geometry, and then print the components—including a circuit board.

Robot “skin” technology has improved from 3-D printing as well. This “skin” contains many sensors, allowing the robot to “feel,” at least in theory. Like human organs, this is certainly still in development but has made great strides in the past decade, in many ways thanks to the advancement of 3-D printing technology.

When a tortoise named Freddy was badly burned in a brush fire in Brazil, he lost 85% of his shell. Thanks to the amazing technology of 3-D printing (and the goodwill of a scientific design team), he had his shell restored and it looks as good as new.

Freddy’s recreated shell was modeled after another tortoise. It was printed in four separate components and glued together. Freddy looked kind of silly with an all-white shell, so the team of designers and scientists painted it. If you saw him sitting next to another tortoise, you probably wouldn’t be able to tell which was which. Now that is one jaw-dropping use of incredible tech.

Tortoises aren’t the only animals benefiting from this upgrade. There’s also a toucan whose replacement bill is 3-D printed, cats and dogs with wheelchairs, and a variety of other animal prosthetics.

Open Bionics website includes over 50 magnetic covers (including Disney, Iron Man, and more). The company also boasts comfort, control, and long battery life. These prosthetics are impressive, lightweight, and comparatively inexpensive. As 3-D printing improves, this industry will surely continue to improve as well. This is an exciting use of new technology to provide a needed service to these individuals.

Advancing steadily over the last decade, 3-D printing will continue to have applications in technology, medical, entertainment, security, and arts. As 3-D printers get better and more efficient, I’m sure we’ll be seeing a lot more bizarre creations in development.