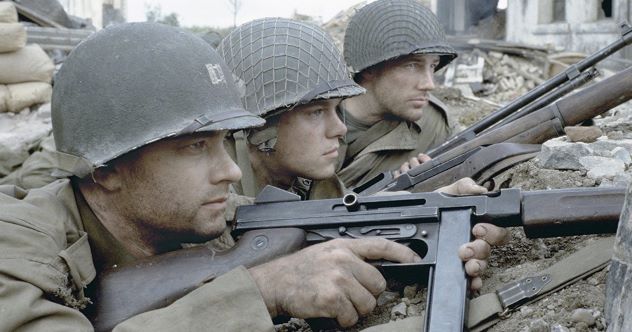 Video games, TV shows, and films all portray modern-day warfare in a variety of ways, but which ones are the most realistic?

When it comes to the war and military genre, the field is ripe for the picking. Oversaturation in various media forms provides a litany of portrayals—some accurate and some a complete departure from the realities and horror that is combat. The following is a compilation of video games, movies, and TV shows that provide an accurate (okay, let’s go for mostly accurate) depiction of the realities of war. No documentaries were included on this list—for obvious reasons.

Based on the United States mission to Somalia amid its civil war in 1993, Black Hawk Down is a cinematic masterpiece that reflects the courage and heroism of soldiers when faced with the worst situation. Revolving around a task force comprised of the Army Rangers (Third Battalion, 75th Regiment), CAG (Delta Force), and the 160th SOAR, this is more than just a war movie. The heroism depicted is based on true events, including the medals of honor awarded to Gary Gordon and Randy Shughart for sacrificing themselves to protect an injured pilot in a downed helicopter.

However, the movie’s realism can be distilled into a singular moment in which a Ranger, James Smith, is shot in his thigh, which severs his femoral artery, causing a vast amount of blood loss. The ensuing struggle for Smith’s life and his passing is one of the most visceral and bloody moments portrayed on the big screen.[1]

The 2005 mission to kill or capture Ahmad Shaw in the Korengal Valley of Afghanistan became highly publicized due to the book Lone Survivor and the movie of the same name. A four-man U.S. Navy SEAL reconnaissance element was sent into the mountains to locate and identify a Taliban leader responsible for the death of a number of American servicemen. During their stay in the mountains, the four-man recon team was discovered by shepherds, who, when let go, informed the Taliban of the SEAL team and their location.

The ensuing firefight left three of the four men dead, badly wounding the final member. A rescue attempt was shot down, killing another 16 Special Operators. It was several days before the lone survivor, Marcus Luttrell, was located and rescued. The singular most heart-wrenching moment of the film’s 121-minute runtime is when Lieutenant Michael Murphy places the needs of his men above his own, putting himself in harm’s way and exposing himself to enemy fire—which mortally wounds him—to place a call to command for a rescue party. Murphy was posthumously awarded the Medal of Honor for his selfless act, which saved his teammate’s life.[2]

Based on real-life missions, Medal of Honor centers around the initial push into the Shai Khot Valley in Afghanistan in 2002. Operation Anaconda was a cooperative effort between SEAL Team 6, Delta Force, the 24th STS, the Rangers, and other infantry units.

The game reflects many real events with members of 6 being thrown out of helicopters on the way to an observation post, gunfights on the mountain, helicopter crashes, and the military hierarchy structure interfering with the on-the-ground decision making, causing the loss of service members lives. The brutal gunfight that ensued after a member of SEAL Team 6, Neil Roberts, was thrown from the helicopter is depicted in great detail in the game.[3]

A handful of TV shows have done justice to the special mission unit world, and even fewer had technical advisers that have been there, done that. SEAL Team distances itself from the rest with its technical competency, real-world situations, and attention to detail. The show’s lead technical advisor and supporting actor—Tyler Grey, a former member of CAG’s A Squadron—does an excellent job of ensuring the believability of the members of the Bravo team’s portrayal of DEVGRU operators.

Having switched over to the streaming platform, Paramount+, the gore and language have ratcheted up several notches, but the quality of plot and gritty realism have remained the same.[4]

Kathryn Bigelow’s 2008 film The Hurt Locker is a quick study of the high-octane world of Explosive Ordinance Disposal Specialists who disarm IEDs and other explosive devices with a hands-on approach. Critics loved the crisp narrative filled with emotional gut punches and resounding victories of yet another bomb taken off the streets.

The fluctuation of highs and lows inside a war zone accentuated by an adrenaline junkie disposal expert and his team, set against the backdrop of mid-GWOT Iraq, make for an explosive mix—pun intended. From suicide vests and buried mines to snipers and rowdy fraternal bonding, the movie is a rollercoaster of emotion and an in-depth look into a different kind of warrior.[5]

Denis Villeneuve’s 2015 titan of an action thriller comes in at number five on the list. Starring Emily Blunt, Benicio Del Toro, and Josh Brolin, the film—written by Taylor Sheridan—delves deeply into the drug war on the U.S. southern border and the multitude of U.S. agencies and faculties involved.

The brutality displayed by the cartels and returned by paramilitary operatives working in conjunction with U.S. forces is gut-wrenching. The non-stop thrill ride opens with the discoveries of bagged, decaying corpses in the wall of a house and fails to slow down through the entirety of its journey. From underground gun battles, shootouts with gang members and special activities division officers, and extermination of entire families, Sicario is hailed by many as an accurate depiction of the war on drugs.[6]

Beginning as a book written by Stephen Ambrose, Band of Brothers recounts the tale of Easy Company, 2nd Battalion, 506th Parachute Infantry Regiment in the U.S. Army’s 101st Airborne Division. This true story is filled with tales of heroism, true leadership, cowardice, heartbreak, and fearlessness in the face of overwhelming odds. In a singular engagement, Easy Company sustained 47% casualties, nearly half of its effective fighting force wounded or killed.

From Normandy, Bastogne, and Operation Market Garden, Band of Brothers tells a tale of tightly knit warriors who suffer unspeakable horrors together in foxholes, trenches, and parachute sticks, wearing a purple heart as a membership badge rather than an award. The mortar attack scenes in the Bastogne forest, causing several of the toughest men to mentally break as they watch their friends killed, depicts the helplessness and chaos of war best.[7]

Rarely will you find a series in the military or action genre that is deeply rooted in a unit’s culture and persona. SIX is a deep dive into the culture of the United States Naval Special Warfare Development Group, DEVGRU for short, or SEAL Team. The team culture, the war crimes, the in-house coverups, the hierarchy amongst the boys, and PTSD are all topics on the table in this high-intensity manhunt-centric series.

From the jungles of Africa to the mountainous regions of Eastern Europe, the series is filled with gun battles, explosions, debilitating injuries, and inside jokes that show the realism of a tight-knit community of tier 1 professional soldiers.

As a viewer, we sympathize with trying to be father and team leader Joe Graves, laugh at carefree Caulder’s antics, and respect the quiet professionalism of Buddha. Traumatic brain injury, gunshot wounds, post-traumatic stress, and drug addiction all face these warriors on the homefront, making it one of the few series to bring the war home with the boys. No matter how hard these men train, they aren’t invincible to the ravages of war on the battlefield and the homefront.[8]

I would be remiss if I did not bring up the 1987 Vietnam-era classic Full Metal Jacket. Directed and produced by Stanley Kubrick, it follows a platoon of U.S. Marines from boot camp all the way through the Tet Offensive. Mental health plays a massive part in the movie’s theme, initially demonstrated by an overweight private in boot camp being bullied until he commits atrocities during a mental breakdown.

The movie then proceeds to take darker and darker turns, as members of the squad are killed off during deployment through booby traps, snipers, and other enemy tactics. Members of the marine squad succumb to their darker sides and join the base inhumane level of warfare. The violence and gore of the movie are truly chilling, then add the pack mentality of young men thrown into the violence of epic proportion that is on full display. The execution of a sniper is a pivotal moment in the movie as the executioner is now considered a man for this act.[9]

Though this tends to be at the top of most lists regarding most realistic war movies, it remains the pinnacle and standard. The opening sequence of the assault on Omaha beach displays the raw carnage and chaos of combat on a spectrum that is impossible to fathom. Set amid true events, the epic saga of a squad of men looking to bring one of their own home is heart-wrenching in its emotional depth and beautiful in its cinematographic storytelling.

Tom Hanks’s character, a captain of a squad who was a school teacher prior to enlisting, must lead a squad of various personalities across Western Europe searching for a young man who has lost all of his siblings to war. Between the gore and violence of many of the battle scenes to the sheer and utter sensory overload of combat, veterans cite it as the most realistic and accurate war movie. It even resulted in the need for a veteran’s PTSD hotline for those experiencing symptoms while watching the movie. A cinematic masterpiece with a cross-over into the tangible.[10]

Visual media tends to be an outlet or way of escapism, for fantastical journeys we as individuals can take without having to leave the comfort of our homes. However, the media sources listed portray some of the most horrific occurrences in mankind combatted with heroism on a scale to match. These movies, TV shows, and video games are not real but do an excellent job portraying what many of us hope never to face ourselves.