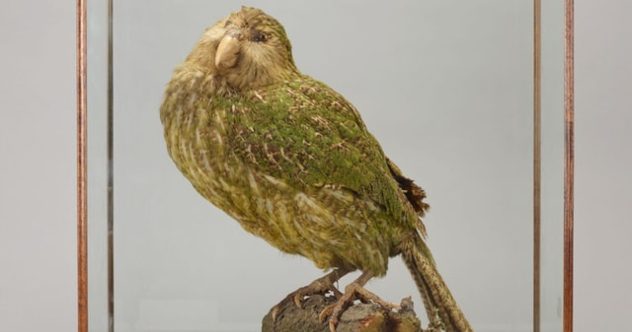 Nature has produced some truly epic survivors. Cockroaches that can survive their head being ripped off, bacteria that can thrive near the center of the Earth, and tardigrades that live through pretty much anything. However, for every evolutionary winner, there is a loser—some awkward, sluggish, goofy thing that somehow snuck under natural selection’s radar to continue its baffling life.

From animals with absurd diets to those who let themselves be eaten and all the way to those who absolutely refuse to procreate, there is no shortage of zoological duds. This list brings together ten of the biggest offenders, ten animals with zero survival instincts.

There are a lot of good reasons for an animal to have tusks. They can be used for defense, spearing prey, digging up roots, mating displays, and more. If there is an absolute worst reason for having tusks, however, it goes to babirusas, whose tusks primarily serve to kill the animals, slowly and painfully.

Babirusas are a type of wild pig with two sets of tusks, and those belonging to male babirusas grow abnormally large. The upper pair grow throughout the males’ lives, becoming longer and longer, until—for no sensible reason—they curve backward and down, piercing the pigs’ skulls. Babirusas have evolved an entirely nonsensical tooth that can grow down through their own heads and stab their own brains, making the pigs’ survival strategy questionable at best.

We could argue that mice and rats have some of the best survival instincts of the animal kingdom. Homeowners can attest to how hard it can be to clean the pests out. But when mice and rats become infected by one specific parasite, they are literally mind-controlled into forgetting how to survive.

The parasite Toxoplasma gondii primarily infects cats, but its hypnotic effects only work on rodents. When cats shed the protozoans in their feces, mice and rats will often eat the feces and become infected themselves. T. gondii then alters the rodent’s genes to remove its aversion to cat odors—particularly their urine. This causes the rats to become easy meals for cats, starting the life cycle over again in a new, and well-fed, host.

The order of mammals known as Sirenia currently consists of just two nearly identical animals: manatees and dugongs. But as recently as 1768, the group contained another member, a giant 30-foot version of the dugong known as the Steller’s Sea Cow. As slow, stupid, and overly trusting as manatees may be, the Steller’s Sea Cow was ten times worse, which led to its rapid extinction.

Within the 27 years of its discovery by humans, the Steller’s Sea Cow was extinct. Undoubtedly, our ancestors need to accept most of the blame, but the cow earns its fair share too. Over their 30-foot length, the animals were all blubber and had no instinct to protect itself at all. They were friendly and approached boats, similar to manatees today, and it led to 27 years of easy hunting followed by infinite years of nonexistence.

Unfortunately, due to habitat loss and competition with humans, cheetahs are now limited to just a few thousand individuals in a small fraction of their former territory. This has turned the cheetah gene pool into a puddle, to put it mildly. Modern cheetahs are inbred, and it has worsened their health and reproduction. To make matters worse, modern cheetahs do their very best to prevent scientists from saving them.

In order to rescue the species, scientists have genotyped cheetahs in captivity to determine the least related individuals to hopefully breed them. The problem is that cheetahs, whether related or not, have no game. Attempts to breed suitable individuals fail more often than they succeed, due to captive cheetah females keeping odd ovulation cycles and all captive cheetahs feeling too stressed to properly mate.

It’s funny to think of the cheetah as this kind of animal. We’re used to seeing these animals run at lightning speeds, hunting down their prey like top predators. But the cheetah goes to show you what humans can do to a once-mighty predator.

If you’ve never heard of a kakapo, that makes sense. There are only about 200 kakapos, or owl parrots, alive today. You can only find them on two small islands off the coast of New Zealand. The reason for their lack of success, aside from the obvious human activity, is that kakapos are too sweet, too dumb, and too defenseless.

Their primary means of defense is sitting still and hoping that they’re green enough to be invisible, which did not serve them well when encountering humans and their hunting dogs. They’re also painfully slow to breed and are just as painfully prone to attempting sex with non-kakapos. Anything even vaguely round and kakapo-sized is a target for misguided males, much to the chagrin of the few remaining female kakapos.

Hymenoptera is the order of insects that includes ants, bees, and wasps. That means that this order has produced countless billions of individuals born to be expendable workers and die young.

Of any order, Hymenoptera contains the most examples of eusociality: the type of advanced, caste-based colony structure bees and ants are known for. These societies split members into reproducing queens (and related roles) and non-reproducing workers. Workers have no hope of reproduction, existing only to support the other caste(s), perform menial tasks, and die—sooner rather than later.

Though all colony members are obsessively dedicated to the survival of the chosen few, the vast majority of members have little to no concern for their own mortality.

But really: could you not include panda bears on a list of most self-destructive animals? The silly ol’ bears don’t have much to brag about when it comes to survival.

Pandas are descended from more traditionally carnivorous bears, and as a result, their guts are not properly equipped for their current bamboo-only diets. That forces them to spend nearly all of their time eating and digesting, both are which are usually done sitting to save energy. On top of their sedentary lifestyle, pandas are the poster children for terrible breeders.

The odds of any two individuals both wanting to breed is astronomically low, and on the rare occasions in which they can be persuaded, panda mothers have a quirky habit of randomly killing their new cubs. Some animals simply do not want to be saved.

Unlike many of the dud entries on this list, octopuses (not octopi) have a lot going for them; they’re some of the smartest animals on the planet, can regenerate limbs, and are masters of disguise. The problem with octopuses is that they have evolved one of the worst reproductive cycles in history.

Male octopuses use one of their arms as a makeshift penis, using it to insert sperm into the female’s siphon—the hole that ejects water and provides locomotion. This makes the female relatively powerless, but she has her revenge when the male, after injection, loses his mind and dies. Like a freaky, alien Romeo and Juliet, the female then dies as well, slowly starving to death after laying her eggs. Octopuses possess an incredible dedication to copulation, but terrible survival instincts.

You knew it was coming eventually. Sloths are so bad at life that they were named after a sin. Imagine if you knew someone named Gluttony; you’d be right in assuming they’re not exactly crushing it at life. But sloths don’t make this list for being slow, nor for being dirty, not even for taking a half-hour to belly-crawl across the road. No, sloths make the list for the way that they poop.

For a reason still unknown to ecologists, sloths don’t just drop their poop from the treetop as most arboreal species do. Instead, they slowly climb down to the forest floor, dig a little hole, poop, and cover it up somewhat. The process is—of course—slow and leaves sloths open both to falls and to predators. Understandably, sloths are often picked off by other animals during their ill-advised bathroom journeys, making sloths an instinctual loser.

Killdeer are a type of wading bird native to North and South America. They earn the top on this list in a surprisingly straightforward way: adult killdeer are constantly trying to kill themselves.

The suicidal behavior of killdeer has a purpose, at least. It stems as a result of parents trying to protect their hatchlings. But that doesn’t make it any less fatal.

One tactic mother killdeer will use upon spotting predators is the “broken-wing display.” Talk about taking a bullet for your kids. The mother will feign a broken wing in order to be chased themselves rather than their children. This, of course, often leads to their death. Another strategy killdeer will employ is the “ungulate display,” in which the bird lowers its head and charges predators, often accomplishing nothing except one killdeer being…uh, killed.