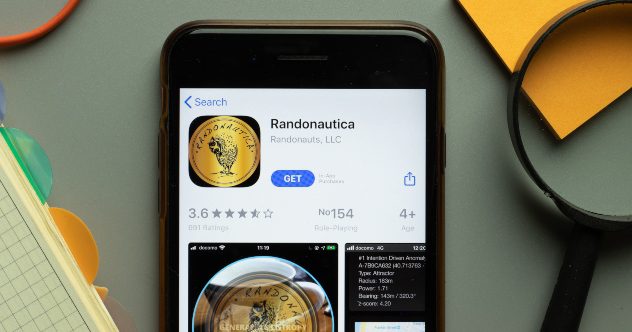 Randonautica is an app that touts itself as “the world’s first & only quantumly generated Create Your Own Adventure app.” And by that, it means that it generates random coordinates for people to walk to and check out. Naturally, when you send thousands of people to random spots that they’ve never been—which are owned by who knows—some sketchy stuff happens.

The real mystery comes from the app’s questionnaire, which asks users their “intentions” and then, as is so often the case, seemingly produces those desires out of thin air with coordinates. The internet is full of stories, photos, and videos from Randonautica users who have stumbled upon some creepy business. Here are some of those stories. The ten times when Randonautica has been sketchy AF.

A teen named Mykena on TikTok shared a video of themselves immediately following their Randonautica quest. In the video, Mykena cries and explains why she will never go Randonauting again.

The intention she entered into the app was “death,” and that’s very nearly what she found. The app sent her to a spot where a body lay still on the ground, bleeding. Mykena assumed that they were indeed dead. Based on her follow-ups and investigations from local news and police, it appears that Mykena did indeed stumble across a body, though it was only near to death. The 23-year-old victim of a recent shooting was luckily discovered in time and brought to a nearby hospital.

YouTube channel Exploring With Josh posted a video of their Randonautica adventure, which they sensationally titled “Police Came – Randonautica Took Me To A Crime Scene!” As misleading as the title is—the police only came because the YouTubers were trespassing—the video nonetheless demonstrates something seriously sketchy.

Randonautica sent these YouTubers away like it has many others out to explore abandoned buildings and private property—often both at once. In this video, the abandoned house is clearly only partially abandoned and sees its share of squatters. The question becomes, then: when will Randonautica send someone to a house that is occupied by someone who is not quite welcoming to intruders?

For some unknown reason, Randonautica keeps sending people to spots in the middle of nowhere with inexplicable, empty coffins just laying there. Seriously, we found a half-dozen examples with a simple video search. In the attached video, one YouTuber stumbles across a single coffin in the woods, which should be frightening enough.

An even scarier example comes from TikToker chris.sees.ghosts, who filmed his Randonautica trip that led him to a field full of coffins. Some even sported inward-facing stakes, which never exist with good intentions in mind. The sheer amount of coffins, some of them customized with those stakes, makes it hard to believe that the video was easily faked.

The TikToker frozenmeals posted a video where she and her friend went Randonauting, leading to an eerie happening and an equally eerie coincidence.

To begin with, it’s worth noting the sketchiness of the coordinates, regardless of what might eventually be found there; the app sent them the coordinates of a detention center. When the two girls arrived, one received a text from an anonymous number asking, “Are you real?” As odd as that is, a nearby graffito within view read simply: “REAL.”

Reddit user u/mindfukt_ shared a photo of their Randonautica experience. What was scary about the experience was not what the app led the user to, but what it led them away from.

Their post title speaks volumes: “Went randonauting last night at 3 am. Came back to my shop burned down.” Their photo indeed shows a workshop, complete with a collection of expensive tools and vehicles, heavily burned and covered in ash. They go on to respond to several comments, among which two hypotheses stand out: if indeed Randonautica is not so random, then it either got him out of the way to facilitate arson, or it saved his life from an attack.

YouTuber Nick Crowley runs a channel where he chronicles both supernatural and true crime incidents. He is as much a skeptic as a believer, and in all of his trips, he has never once resorted to sensationalism and exaggeration. And yet, the first time he tried Randonautica, simply as an experiment, he was led to a crime scene.

Crowley set out toward the coordinates specified by Randonautica and found himself unable to get to them. The exact spot was swarming with police vehicles, which formed a ring around the location. It was clear that something serious and potentially violent went down at the Randonautica spot, almost exactly when the spot wanted him there.

Even if it had led users exclusively to lush meadows and secret, pristine springs, Randonautica would still be sketchy. That’s because the app’s creators claim the app is based on quantum physics and allows users to actually influence its random number generator with their thoughts. And, as no one should have to say ever, that is not what is happening.

The app’s creators cite one 1998 study as evidence of their “mind-machine interface,” a study which has so little credibility that its own authors “admit that it was weak and it needed to have further research associated with it.” Reporting on the Randonautica algorithm, The New York Times interviewed a physicist who specializes in random number generators, who said this: “completely absurd… There is no quantum physics here. This is just people using big science words to sound magical.”

Randonautica’s focus on combining randomness, mysticism, and blind adventure has attracted some dangerously obsessive and misguided users. One example is Reve Kalell, aka r33vo, who began a series of TikToks video investigations into a hypothetical child-trafficking ring in a California business park. The videos went viral and have attracted a dedicated base of amateur sleuths intent on helping Kalell discover the “truth.”

As several legitimate journalists have pointed out, the problem is that Kalell’s truth is nonexistent. He, and now his followers, have taken to connecting any dots they possibly can, no matter how thin the connection, to justify their belief that a series of random businesses are all fronts for child trafficking.

One of the businesses Kalell is suspicious of is a toy manufacturer that primarily makes Star Trek-themed toys. One of Kalell’s expert detectives pointed out that the company makes toys of Tribbles, which the company describes as “guaranteed not to reproduce.” Naturally, this must be a reference to the inability of child-slaves to have children, right? In actually, as a more sensible commenter pointed out, “It’s a Star Trek reference, goobers.”

By now, many, and possibly almost all, of the scariest encounters experienced by Randonautica users could be faked. As they usually show up on YouTube and TikTok accounts, it’s reasonable to expect a certain level of exaggeration and drama, if not blatant staging. But certain themes seem to pop up in many videos, which only leads to further questions.

For example, many users like Redditors u/callmediane13 and u/daredthread333 have stumbled upon graffiti or other text that say some version of “This Is the Sign You’re Looking For.” On top of that, users have been led to similar faux-inspirational writing in one form or another, a large portion of which is too complicated or too old to have been faked. Perhaps Randonautica simply sets its algorithm to image-search for quotes, but then that too would be a pretty sketchy thing to do.

1 Bodies in a Suitcase

By far the most famous scary experience on Randonautica, and one which has been thoroughly verified, is the case of the Seattle teenagers who stumbled across two dead bodies stuffed into a suitcase.

Randonautica led the teens to a rocky shoreline and pier, and sitting among the rocks was the suitcase. You can watch the teens’ story on TikTok as they eagerly open the case, expecting money or a similar prize. Instead, they were greeted with trash bags and an overwhelming odor, which prompted them to call the police. Authorities then confirmed that the suitcase’s contents were two sets of human remains, both victims of homicide.