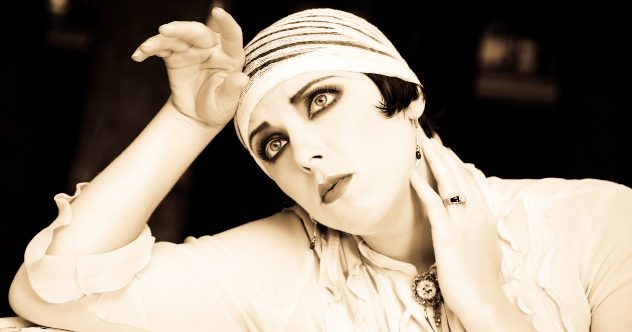 Our first films were silent, making that era in filmmaking an artistic wild west. Many rules and regulations had yet to be created, mainly because a lot of the accidents that prompted them were still occurring.

In many silent films, lead actors performed their own stunts. Also, in these films, the stunts performed were batsh*t crazy. When you combine that with the stars’ personal lives, which seemed to be an epic mishmash of drama and scandal, you get an era full of stories that just get crazier and crazier.

That’s where this list comes in: bringing together ten stories about silent film stars that nonetheless scream crazy.

Green screens, mechanical rigs, and special effects help actors and actresses with absolutely zero qualifications drift through high-speed chases, fly TIE fighters, and even battle the odd dragon or two. But back when movies were still new, and people’s imaginations were wild, you would just have to do it all yourself.

That brings us to Ormer Locklear—one of the most famous stunt pilots of his day and inventor of such feats as the “wing walk” (which is exactly what it sounds like and obviously absurdly dangerous). After achieving mainstay success as a daredevil superstar in The Great Air Robbery in 1919, Locklear’s hubris would catch up to him when he unsuccessfully pulled out of a nighttime dive for the 1920 film The Skywayman during its final day of shooting, killing both himself and his co-pilot. Sadly, neither of these films has survived to this day, although his legacy would remain.

Buster “The Great Stone Face” Keaton was known for some of the greatest acting chops in history; he would also become unparalleled in his physical prowess. Not only would he perform dangerous stunts, including car crashes, explosions, and fight scenes without doubles, he would actually double for other actors and do their crazy stunts too.

There weren’t any rules—this is art we’re talking about here! This would come to a head in 1928’s Steamboat Bill, Jr. when an actual freaking house was dropped on him, and he thankfully was placed in the exact spot to pass through a window instead of being, you know, crushed to death. Move over, Wicked Witch of the East, he made this look like child’s play.

8 Jean Harlow in “Kill and Be Killed”

In the 1930s, few silent film star actresses were better-known than Jean “Baby” Harlow. She would explode into stardom as a rich L.A. socialite after an unintentional meeting with Fox executives—while driving her friend to auditions, no less. This “Blonde Bombshell” found further success in “Platinum Blonde,” a 1931 hit that inspired women worldwide to bleach their hair to match…with weekly applications of harsh chemicals such as ammonia, Clorox bleach, and soap flakes. And that’s just the beginning of where things seem to take a dark turn.

Baby was said to have mob connections, had nude photos taken of her at age 17, and her second husband was found dead from a gunshot wound to the head shortly after their wedding. She was also plagued with severe illnesses throughout her short life and continued to film through hypothesized kidney failure in 1937.

Baby died only a week later after being sent home. Rumors about her death would circulate for years afterward and captivate the country just like Baby did. However, it’s not so unbelievable that someone who once claimed to be a descendent of Edgar Allen Poe (or, at least, MGM marketed her as such to distinguish her from her peers) would die such a young, tragic death.

Rudolph Valentino was huge in his time. The Italian actor developed a tremendous following, primarily female, by being one of the film industry’s earliest sex symbols. In fact, the popular nickname “Latin Lover” was coined specifically for Valentino. Alongside his other nom de sex, “The Great Lover,” it is clear that Valentino was the absolute epitome of masculine appeal. While that was true for his professional career, in his personal life, Valentino had little use for his way with women. Only decades after his death did people en masse begin realizing: Valentino was gay.

On the rare occasions in which Valentino’s sexuality was questioned during his life, the actor reacted like a raw nerve, quickly and instinctually. When one Chicago Tribune reporter labeled him a “Pink Powder Puff,” Valentino responded by challenging the writer to a boxing match. More than just being culturally taboo, admitting he was gay would have been career suicide for the Latin Lover.

The “Ice Cream Blonde” Thelma Todd was a comedy superstar in the ’20s and ’30s. Until, that is, her premature death in 1935 when she was only 29. After Todd was found dead inside her car, an autopsy and several investigations ruled her death as a suicide, which still stands today. That hasn’t stopped the speculation that foul play was involved, and some evidence at the scene supports that idea.

As the Chicago Tribune writes: “While a grand jury ruled that Todd committed suicide, it was unable to explain her broken nose, the bruises around her throat, and two cracked ribs. Apparently, the grand jury thought Todd also beat herself to death.” That, combined with unofficial claims that her blood-alcohol level was unnaturally high and her immaculate shoes (which would have been impossible to be clean if she had walked the 500 feet through the mud to get to the garage where her car was parked) leave questions in the minds of many.

5 Enemy of the State—Charlie Chaplin

Charlie Chaplin was one of the biggest stars of the silent film era. He was a wildly talented actor, comedian, and dancer, and—according to the United States government—a no-good, dirty commie. In fact, Chaplin was one of the earliest stars ever “blacklisted,” as the term grew out of McCarthyist hearings attempting to shun Un-American individuals and destroy their influence.

Due to his simple refusal to answer any questions about his political views, he was officially labeled a security risk and a communist (or, in their words, a Bolshevik). While overseas promoting his film Limelight, Chaplin was informed that the U.S. Attorney General had made it official: Chaplin was no longer allowed to re-enter the United States.

He spent the rest of his days living in Switzerland, his film career never at its pre-accusal peak. Finally, in the last years before his death, the political atmosphere shifted enough that he began to be celebrated stateside once more.

Celebrated dramatic actor John Barrymore, known for both stage and screen, died in 1942 from a combination of ailments, all brought on by decades of alcohol abuse. He was 60 at the time, and his career had been long and lauded, so it wasn’t quite the untimely tragedy common to so many Hollywood actors. Instead, what makes Barrymore’s death so interesting is what his friend then did with his body.

A group of Barrymore’s friends, including legendary director Raoul Walsh, actually stole the late actor’s body from the morgue and brought it to the home of also-legendary actor Errol Flynn. They then propped it up and left it for Flynn to discover when he arrived home as a macabre prank. Though some sources have denied the prank ever occurred, Barrymore’s granddaughter Drew Barrymore (yes, that one) confirmed that the story was indeed true during her appearance on Hot Ones.

Depending on who you ask, Roscoe Arbuckle, better known as Fatty, was either a violent murderer or a tragic patsy for a troubled woman. Either way, the actor/writer/director’s career has long since been overshadowed by one scandal: his alleged rape and manslaughter of actress Virginia Rappe.

While attending a party hosted by Arbuckle, Rappe was found ill and taken to a hospital. There, she accused Arbuckle of raping her and, three days later, died from a ruptured bladder. This ignited a media frenzy and perhaps the trial of the century. And a second trial. And a third trial. Though Arbuckle was eventually acquitted of all charges and even issued a formal apology by one of his juries, the black spot on his image was too dark, and his career in Hollywood rapidly faded away.

We still don’t know how William Desmond Taylor died. We likely never will. That’s because almost every detail of the case is crazy. Let me explain.

Despite Taylor having an apparent bullet hole in his back, a fake daughter announces his death to be a natural one via stomach hemorrhage. The lack of a break-in and money on Taylor’s person—but not in his bank account—was all still accounted for. There are delusional statements Taylor made in the days leading up to his death. There is a report by local authorities that someone had told them to ease off their investigation. AND there are also the literal hundreds of confessions made by several acquaintances and strangers alike.

Watch the attached video for a start—the Ghoul Boys will get you hooked on this true murder mystery.

Adjusted for inflation, it is likely that the single most expensive scene in movie history: the train crash from Buster Keaton’s The General. Keaton, who starred in and directed the film, received a $750,000 budget, equivalent to around $12 million today. Keaton chose to spend an undisclosed large fraction of that money on one scene.

The scene shows a two-car train attempting to cross a burning bridge, failing, and collapsing into a river. In typical silent film-era fashion, all of it was real. The train, the bridge, the fire, the river, the crash. Keaton actually bought the train and demolished it. Because of this, he only had one possible take, so he set up six cameras at once to ensure the stunt wasn’t wasted.