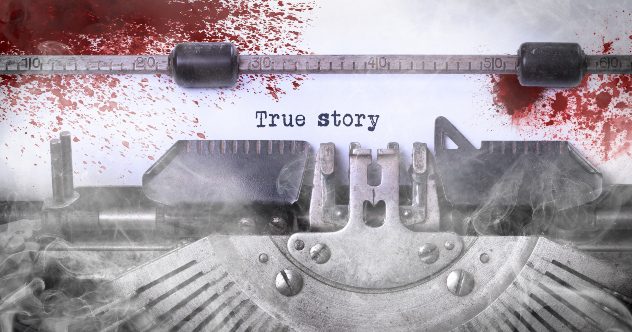 There’s just something about podcasts, more than many other media, that inspires fanatical devotion. The same can be said, and arguably more so, for the true crime genre. When the two combine, then you’d be safe in assuming that more than a few smash hits are in store. For the better part of a decade, those hits have kept on coming, and by now, in 2021, the world of true crime podcasts is massive and massively popular.

Those with an appetite for the macabre and mysterious have hundreds of major true crime podcasts to choose from in just as many different styles. Some tell true events as nonfiction narratives, some delve deep into the psychology of slayers, and some bring comedy to balance out the crime.

No matter how you want your horror served up, it’s available. This list gathers ten sources for you to whet your unhinged whistle—ten of the best and creepiest podcasts for true crime junkies.

It’s hard to express exactly what makes Redhanded, and its hosts Hannah Maguire and Suruthi Bala, such an excellent podcasting experience. If we had to pin it down into one word, it would be “charm.”

Redhanded has built itself an impressive following. Its fans, who refer to themselves as Spooky B*tches, keep coming back, not just for the grizzly murders, but for the exceptionally tight banter, wit, and humor. Redhanded’s unique and welcoming charm makes the murder medicine go down a bit smoother.

Do your own research and check out A. the number of reviews that Morbid: A True Crime Podcast has on Apple Podcasts and B. how many of those reviews are five stars. For a podcast just over three years old, its success is exceptional.

The fact that Morbid is hosted by Alaina Urquhart, an autopsy technician, and Ashleigh Kelley, a hairdresser, should hint at the series’ tone, a mix of lighthearted chatting and gory details. Morbid is an effortless listen and more accessible than most, making it a great starting place for new true-crime fans.

8 And That’s Why We Drink

And That’s Why We Drink is a great choice if you’re looking for a little bit of everything in your podcast. The series is part comedy and part serious exposition, as well as being half paranormal and half true-crime. Every episode starts with a paranormal story and follows it with a true crime story, ensuring a 50/10 split between the, in their own words, “eerie and theory.”

Host Christine Schiefer and Em Schulz, especially in the series’ middle years, incorporate its title by ending episodes with a list of reasons why these creepy cases forced them to drink. For new true crime junkies who want to taste the variety in the podcast medium, And That’s Why We Drink is an excellent first step.

It would be impossible to list the best true crime podcasts without including the one that started it all: Serial. Hosted by Sarah Koenig, Serial debuted in 2014 to immediate acclaim from fans and critics alike. Its first season quickly became a cultural phenomenon, even earning a Peabody.

It would hardly be an exaggeration to describe Serial as the one podcast that did most of the leg work in promoting podcasting to the mainstream and in reinvigorating popular obsession with all things true crime. As the Peabody committee themselves wrote, “Beautifully and intricately composed, utterly gripping… Serial rocketed podcasting into the cultural mainstream and inspired countless follow-up pieces… For its innovations of form and its compelling, drilling account of how guilt, truth, and reality are decided, Serial is honored with a Peabody Award.”

6 Last Podcast on the Left

The Last Podcast on the Left is a very singular experience. Unlike the intimate, measured style listeners have come to expect from many podcasts, due to hosts like Garrison Keillor and Ira Glass, the Last Podcast on the Left is loud, rapid, and in your face. Hosts Ben Kissel, Marcus Parks, and Henry Zebrowski perform more like a morning radio zoo-crew than they do podcasters, but contrasted with the darkness of the true-crime subject matter, the style is a blast.

Unlike the poise and preparation of a series like Serial, every episode of Last Podcast on the Left feels like its hosts just finished a bar crawl and snuck into a recording booth to continue their boisterous conversation about grizzly murders and goblins. As a result, certain true crime purists will be turned off. Those that aren’t, however, are in for a party whose theme is split between My Brother, My Brother, and Me and Unsolved Mysteries.

Anatomy of Murder is one of those true crime podcasts hosted by experts in the field, and, pound-for-pound, it may boast the most expertise of them all. The show is hosted by former New York City homicide prosecutor Anna-Sigga Nicolazzi and deputy sheriff-turned-investigative reporter Scott Weinberger. On top of that, every episode sees the pair joined by someone close to the case, be it a detective, prosecutor, or family member.

When the show debuted just over a year ago (at the time of writing, December 2021), it promised “to take listeners behind the scenes, for an insider’s perspective,” and it has consistently delivered. The hosts are as professional as they are knowledgeable, and the episodes are tightly edited; the result is a podcast that feels authoritative and practical—in the best possible way.

There are a few million true crime purists that will see the name Lore and cry, “Hey, that’s not true crime!” Indeed, Apple doesn’t even include the hit Aaron Mahnke podcast in their true crime section, placing it instead within history. But there is one little facet about Lore that earns it a place in the true-crime family: most episodes of Lore are about crime. And are true. And they are consistently some of the most entertaining podcasts episodes out there.

With Lore, Mahnke explores folk tales, their alleged, often paranormal, extents, and their very real bases and inspirations. This leads Mahnke down rabbit holes both historical and modern, and in either case, leads to fascinating stories with “Aha!” reveals. Mahnke’s smooth, rhythmic voice and his well-structured storytelling, in particular, hook you fast. Rare for a podcast, Lore even spawned a spinoff television series, which streams on Amazon Prime Video.

This will likely be the most surprising entry on the list, as you’re unlikely to see the Cold Case Murder Mysteries podcast grace even the top 100 among Apple’s true crime rankings. But what the show lacks in breakout success, it makes up for in its uniqueness and, surprisingly often, genuinely profound insight.

The driving force behind this underrated gem is Ryan Kraus, a podcast host who is truly unlike any other. And unlike many hosts who gain that praise, Kraus actually deserves it. We challenge you to finish any random episode of Cold Case Murder Mysteries and ask yourself, “Has anyone drawn connections in this case that are as unexpected and revelatory as Kraus’s?” Particularly regarding the psychology and sociology of those involved in crimes, Kraus’s Cold Case Murder Mysteries may be one of the best podcasts out there.

Most weeks, Crime Junkie is Apple Podcasts’ most-listened-to true-crime podcast. That should say it all. If you need more convincing, you’ll want to hear that the podcast has been downloaded over 500 million times and has been ranked at or near the top of dozens of major “best of” lists regarding true crime podcasts.

Hosts Ashley Flowers and Brit Prawat have been repeatedly cited for their passionate presentation and thorough research of their cases. Their prowess and sensitivity have even allowed Crime Junkie to transcend genres, earning it repeated top spots among most played podcasts lists among all genres.

There’s no number one choice that would please everyone, especially not a comedy/true-crime hybrid. But My Favorite Murder, anchored by the unparalleled rapport and flawless repartee between hosts Karen Kilgariff and Georgia Hardstark, is sure to please most. Almost since the very beginning, the series has consistently ranked among the most listened-to true crime podcasts, and branched out into live tours, a book, its own podcast network, and perhaps best of all: one of the most dedicated and fervent fan-bases (or “fan cults”) you’ll ever find.

Episodes of My Favorite Murder vacillate between recorded and live sessions, both with their own fun and flavor. In recorded sessions, Kilgariff and Hardstark spend the first portion riffing on their lives and current events and the rest reading each other selected true crime accounts. In the live shows, though the format is technically the same, there is an added section: the near-constant crowd work and frequent breaks for applause and wild screams.

Their fans, dubbed the Murderinos, are rapid in their zeal for the podcast and become as much a part of the show as its hosts and stories. If you’re a part of the minority of true crime fans that haven’t already, give the ladies a chance, and you’ll quickly see why they’ve earned the devotion of so many.