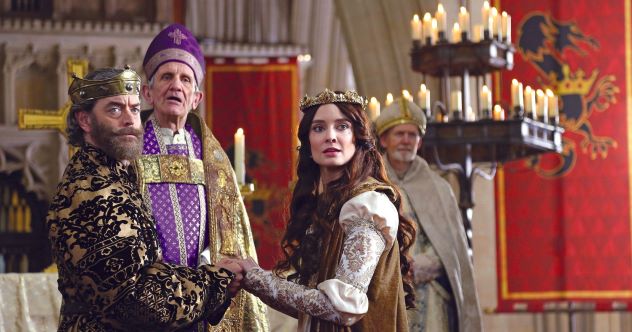 What’s a good television series without a good soundtrack? Memorable music moments take on a life of their own within a TV series, and this list is full of them. We’re counting down the top 10 musical moments from musical V shows that had you singing along. (WARNING: CONTAINS SPOILERS!)

Star was a musical drama on FOX network about a poor, success-driven young girl named Star Davis (Jude Demorest) and her two-girl group bandmates as they tried to achieve fame in the Atlanta music industry. This three-season drama was full of original songs and shiny pop and R&B performance numbers.

One of the top musical moments was Star’s performance of “Don’t Know Why” in season one. This powerful R&B ballad was in response to the titular character being physically abused by her season one boyfriend, Hunter (Chad James Buchanan). With raw intensity, the song details the battle of staying in a toxic, abusive relationship and not being able to let go.[1]

Nashville was a musical TV drama about country music queen Rayna Jaymes (Connie Britton) and her rivalry with new generation country star Juliette Barnes (Hayden Panettiere), as well as the drama that unfolds in the Nashville music scene. In season five, Rayna’s character tragically dies from injuries she suffered in a car crash, changing the trajectory of the show and bringing about emotional music moments.

One of the most moving musical moments of the show is when Rayna’s family comes together to sing her song “Sanctuary” to honor her at the CMT Awards. The oldest daughter, Daphne (Maisy Stella), breaks down while singing her late mother’s song, so her father and sister come on stage to comfort her and help sing in a raw emotional performance. The beautiful moment had viewers crying along with the family.[]

First aired in 2015, Galavant was a two-season ABC medieval musical comedy. The series showcased the adventures of the title character Galavant (Joshua Sasse) in his quest to save his captured girlfriend, Queen Madalena (Mallory Jansen), from the hands of evil King Richard (Timothy Omundson). The music on the show was composed by famed composers Alan Menken and Glenn Slate, so there were sure to be some catchy tunes featured.

Perhaps one of the catchiest tunes is the theme song “Galavant.” Being the first song that Menken and Slate wrote, the song establishes the tone for the show perfectly. It set the series in motion by describing the general plot in a fun melody that you can’t help but play over and over again.[3]

Imagine a TV show about the making of a Broadway show. That was Smash, a short-lived NBC musical drama about two playwrights creating a Broadway play about the life of Marilyn Monroe. The series focused on the rivalry between two actresses, Ivy (Megan Hilty) and Karen (Katharine McPhee), competing for the role of Marilyn. Packed with covers and original songs, Smash was loved so much by theater geeks everywhere that there have been talks of taking the play within the show to Broadway.

One song stuck out above the rest—”Let Me Be Your Star.” Sung in the pilot episode in competing verses by Ivy and Karen, it set the tone for the show and described how many aspiring performers feel.[4]

When High School Musical: The Musical: The Series (HSMTMTS) was announced in 2018, it had big shoes to fill as it was perceived to be a continuation of the Disney Channel sensation High School Musical trilogy. However, HSMTMTS takes on a life of its own, and the TV characters have no relation to the beloved characters of the original as it takes place in the real world where they attend the school that the movie was filmed in. The musical series follows the young theater students of East High as they put on a theatre production of High School Musical and the drama and relationships that form behind the curtain.

While most songs performed within the series are from High School Musical, there are a few original songs. One of the most popular original songs from the first season is the Billboard Hot 100 hit, “All I Want,” performed by lead female character Nini (Olivia Rodrigo). Nini sings this heartbreak anthem after having boy troubles dealing with a betrayal from her current boyfriend while still reeling from the breakup with her ex, Ricky. With lyrics like, “All I want is love that lasts / Is all I want too much to ask? / Is it something wrong with me? / All I want is a good guy / Are my expectations far too high?”, this song is relatable for teen girls and adults alike.[5]

Zoey’s Extraordinary Playlist was an NBC musical dramedy about a young, smart computer coder named Zoey (Jane Levy) who begins to hear people’s innermost thoughts in the form of elaborate musical numbers. Despite the challenges her newfound powers bring about, she finds that they are a gift as they allow her to connect with her father, who cannot communicate as he suffers from a neurological disease called progressive supranuclear palsy (PSP).

Zoey’s relationship with her father Mitch (Peter Gallagher) can be considered the anchor of the show, and their performance of One Republic’s “I Lived” is one of the most heartwarming moments within the series. After passing away in season one, Mitch returns to the show in the series finale in a dream sequence to sing to Zoey and encourage her to take chances, sending viewers to immediately reach for their tissue boxes.[6]

When Empire first emerged on the FOX network in 2015, the hip-hop drama was a huge success, capping its first season with more than 17 million viewers, according to Variety. The show, featuring music produced by Grammy-winning producer-rapper Timbaland, focuses on the family drama between music mogul Lucious Lyon (Terrance Howard) and his wife, Cookie Lyon (Taraji P. Henson), and their three sons as they all seek control of the family music label—Empire Records. With music and drama guaranteed in each episode, there are several memorable moments to choose from.

One of the most memorable, however, comes from season one with the performance of “You’re So Beautiful.” Most fans can recall the shock and tension this performance caused when Lucious’s middle son, Jamal, performed his father’s song and used it to come out by switching the words from “this the kind of song that makes a woman love a man” to “man love a man.” The relationship between Jamal and Lucious was very rocky as Lucious initially did not accept his son’s sexuality. But watching Jamal use the song to stand in his truth and take pride in his sexuality had many viewers cheering him on and singing along with him.[7]

3 Julie and the Phantoms – “Unsaid Emily”

Netflix’s Julie and the Phantoms is based on the Brazilian series Julie e os Fantasmas and is directed by Kenny Ortega, the man behind many Disney hits, like High School Musical and Descendants. The musical comedy-drama is about a 15-year-old girl, Julie (Madison Reyes), struggling with the loss of her mother and finding her passion for music again. However, her passion returns after meeting three teen ghosts from 1995 who used to be a band in her garage. Only she can see them, but everyone can hear them when they play together, so they form a band, and viewers’ ears are blessed with a song each episode.

Despite the quirky concept, there is a lot of emotional depth within the show and in the music. One of the more emotional songs is sung by the lead male singer of the group, Luke (Charlie Gillespie), who sings an emotional ballad about his estranged relationship with his mother, and all the words he never got to say to her before he passed away. It was a very touching moment for a kids’ show, reminding viewers of their mortality and to tell your loved ones how much they mean to you while you’re still here.[8]

2 Crazy Ex-Girlfriend – “The End of the Movie”

Crazy Ex-Girlfriend was a satirical musical comedy featuring original songs in each episode. The show follows the life of Rebecca Bunch (Rachel Bloom), a quirky lawyer who leaves her seemingly perfect life in New York and moves to West Covina, California, following her childhood summer camp boyfriend after a chance encounter. The show has a surprising amount of heart and touches on mental illness in a way that balances comedy and seriousness in a relatable way.

One of the more somber songs comes from season three, when Rebecca hits her lowest point after sleeping with her ex-boyfriend’s dad. Grammy-nominated singer Josh Groban lends his musical talents, making a cameo with a song describing the randomness of life and how situations don’t always end up resolved like they do at the end of a movie. Despite the specific context of this song, it can be relatable for any viewer, except for the part where Groban beautifully sings “never bang your ex-boyfriend’s dad,” which is pretty sound advice, nonetheless.[9]

Anyone who watched television during the 2010s has heard of the phenomenon that was Glee. Its pop culture relevance was undeniable, and that’s why it takes the top spot as it has inspired many of the other shows on this list. Glee was a smash hit when it first came out, racking up 19 Emmy Awards and 4 Golden Globe nominations at the end of its first season. It also has been referenced in many other shows like The Office, which had a whole episode about a Glee watch party. Although the musical comedy was a bit outlandish at times, it’s not just known for the music, but its inclusivity in covering topics about LGBTQ+ youth, teen pregnancy, and bullying.

With over 700 songs to choose from, there are many contenders for the top song, but the clear winner is Glee’s rendition of Journey’s “Don’t Stop Believin’.” It was the show’s first official hit and held such a special place that they sang it four times! The most memorable performance was the one at the end of the pilot, where they sang successfully as a group for the first time as the music teacher, Mr. Schue (Matthew Morrison), proudly watches, signaling the beginning of something special.[10]