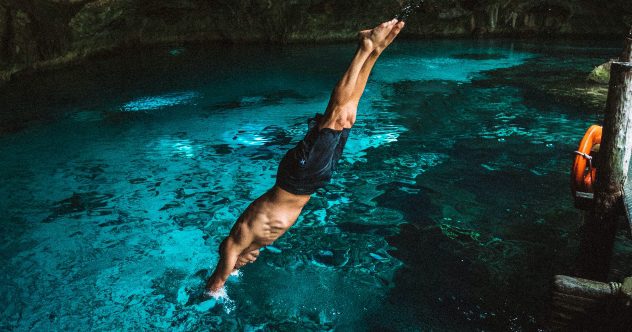 Cave diving is insane. That may be the shortest and most subjective opening sentence in Listverse history, but it is also supported by a mountain of evidence. A gruesome, water-logged, decaying, lightless mountain of evidence, scattered and wedged into thousands of cramped, jagged chambers beneath the Earth.

Combining the isolation and desolation of cave exploring with the powerlessness and (often literal) madness that can come with scuba diving, cave diving is quite obviously a tremendous challenge. Only the bravest and most skilled adventurers attempt this most extreme of extreme sports, and even then, their success is far from guaranteed.

The list gathers ten stories from cave divers who unfortunately found themselves in the creepiest of circumstances. Whether it’s close calls with death, brushes with the paranormal, or just plain tragedy, here are ten of the creepiest tales of cave diving.

Related: 10 Fascinating Cave Finds That Will Blow Your Mind

The Tham Luang rescue is likely the most famous cave rescue operation in history. Involving thousands of rescue workers, lasting 18 days, and drawing worldwide media attention, the story of one Thai children’s soccer team trapped in a flooded cave became a tense cultural phenomenon. However, the children were not alone in their crisis, and their would-be rescue divers suffered some of the worst injuries and trauma of the whole incident.

On June 23, 2018, twelve children and their young assistant coach began exploring the Tham Luang Nang Non cave system, and soon after, a sudden torrent of rain partially flooded the cave and trapped them inside. Starting the next day, international teams of rescue divers searched the newly-underwater cave for over two weeks.

All told, over 90 divers helped rescue the boys, and their mission was a success; all thirteen were rescued alive. However, two rescue divers died due to the operation—one during the dive and one a year later from a dive-related blood infection.

Luckily, the creepiness of Rummu Quarry doesn’t involve any death—at least, not directly. While on the surface, the site is a simple quarry and popular tourist destination, underneath its surface lies a sad, bleak history.

The quarry was formed when the limestone mine that forms its base fell into disrepair and began flooding. While it was still a mine, any limestone pulled from its rock walls came from the ceaseless, merciless hard labor of Soviet prisoners, specifically those sentenced to the Rummu prison work camp.

Though scenic at its surface, the quarry’s base still holds the remnants of the prison, including bunkers, walls, and rusting barbed wire to symbolize its cruelty.

Admittedly, the story of Italian miner Modesto Varischetti may be more peculiar than creepy. However, there is still plenty of creeps to be had when you consider what he went through.

In 1907, Varischetti was working in a gold mine in Bonnievale, Australia, when a severe thunderstorm quickly flooded major sections of the mine. He managed to find an air pocket during the deluge and sat there in the cold, silent darkness, awaiting rescue.

Varischetti heard no sign of rescue for five long days when a rescuer in old-timey ocean-diving gear finally managed to reach him and bring him food. Even then, it took another four days for rescuers to extract Varischetti from the flooded mine.

As strange as it is, one of the miners who aided in Varischetti’s rescue was none other than future U.S. President Herbert Hoover.

Developed in 1959, the Titan I was the U.S.’s first intercontinental ballistic missile. The missiles were housed in underground complexes across the Western U.S., but by the late ’60s, the missiles’ obsolescence had rendered the complexes useless.

The sites were gutted for scrap parts and largely left abandoned. After one site flooded, the silo near Royal City, WA, a private company gained permission to host dives through the site, and they are as creepy as they are majestic.

In one section, the tour company’s official synopsis of the dive reads, “You’d never know you were about to enter a 160-foot-tall chamber that housed a ballistic nuclear missile!” That should tell you all you need to know about the type of people who volunteer for this (manmade) cave dive. Divers can even find themselves “mere inches from where the massive Titan I ICBM which once stood at the ready,” which may creep you out for several reasons.

On August 18, 2010, Ben McDaniel disappeared after diving into Vortex Spring in Florida. After two dive shop employees saw McDaniel dive into the spring early in the evening, he was never seen again.

Though McDaniel’s disappearance could easily have been a simple, if tragic, case of diving error or misfortune, many are unconvinced. During the investigation, several odd pieces of evidence came to light, which led many to question the events of McDaniels’ last night—even suspecting foul play.

For a few examples, there is McDaniels’ odd behavior before his last dive; the recovered air tanks belonging to McDaniels that were found to be inconsistent with his dive plans; McDaniel’s own personal and financial troubles leading up to the disappearance; the suspicious death of the spring’s owner the following year; and the repeated police refusals to release important evidence to the case.

5 We Have to Go Back

Pluragrotta is a popular cave diving spot in Norway due to its beauty, extreme depth, and excellent underwater visibility. In 2014, it also became famous as the site of an awful diving accident, and subsequently, an amazing recovery mission.

In February, five Finnish divers attempted a long, deep dive through the caves. Only three were successful, and even they all experienced crippling decompression sickness. Divers were then banned from the cave, and an international team of rescuers searched the cave for the two bodies. After they deemed the mission too dangerous, the three original survivors took matters into their own hands.

With a large support crew but no official clearance, the survivors undertook a daring mission back into the cave’s depths to recover their friends’ bodies. They succeeded and alerted authorities of the bodies, prepared to accept their punishment for violating the cave ban. Instead, they faced no charges, with one of them even earning a medal from the Finnish president.

The documentary “Diving into the Unknown” chronicles the whole story, which is more dramatic and harrowing than any Hollywood blockbuster.

The story of the death of John Edward Jones has become notorious for its heartbreaking and protracted nature. It has even been referred to as “the worst death of all time.”

On November 24, 2009, Jones and his friends began spelunking in Nutty Putty Cave when Jones decided to attempt passage through a section known as the Birth Canal. The passage is frighteningly narrow and descends vertically, meaning Jones had to wiggle his way down it headfirst. Unfortunately, the mere act of breathing made Jones’s torso too wide for the passage, and he became stuck.

The details of rescuers’ attempts to free Jones are a grim slog of dashed hopes and slow suffering. At one point, Jones was even partially raised out of the Canal by a rope and pulley system, but the machine failed and plunged him right back to his original predicament. After more than 24 hours trapped upside down and compressed, Jones eventually lost his ability to breathe and died. Shortly before his death, rescuers managed to lower a radio down to Jones, who could speak to his wife one last time.

There’s no way to write a list like this and not include the 1967 Mossdale disaster. Located in Yorkshire Dales, England, the Mossdale Caverns were a popular hiking and cave exploration destination. We say were because the 1967 deaths of six cave explorers forced the local government to prohibit any future exploration.

The cave was a notoriously hard slog through varying terrain and water levels that led four of the original ten explorers to cut their adventure short, exiting the cave to safety. Sadly, the remaining six never joined their friends, as rapid rainfall flooded sections of the cave and prevented their escape. Rescue efforts over the next two days located the six bodies, confirming their deaths and cementing the Mossdale disaster as the deadliest cave incident in British history.

2 It Was All on Tape

The cave diving death of Dave Shaw is a multilayered tragedy. Warning: the attached video shows Shaw’s personal camera footage from the moments leading up to his death, and they are unpleasant.

The tragedy began with the 1994 death of Deon Dreyer. A decade later, while on a dive at the same site, Shaw found Dreyer’s missing body. In a class act, Shaw contacted Dreyer’s parents and promised them that he would return to the site and recover their son’s body for them.

Shaw mounted the return dive as promised and reached Dreyer’s body again. Unfortunately, though, Shaw then began suffering from nitrogen narcosis, which prevented him from breathing and thinking normally.

Dave Shaw died next to the body of Deon Dreyer. The tragedy then continued as Shaw’s support diver, Don Shirley, nearly died trying to save Shaw as well.

Jill Heinerth is somewhat of a legend in the cave diving community. She has filmed dive documentaries for multiple major channels, has authored an impressive library of dive-related books, and—as you would expect—has dived in a staggering amount of caves across the world. It should carry a great deal of weight to hear that she cited one diving trip in particular as containing several of the scariest moments in her life.

The trip Heinerth referred to was her dive into a newly-formed, moving iceberg. The object was, as she puts it, “an iceberg the size of Jamaica” that was “the largest moving object on our planet.”

Alongside two fellow divers/documentarians, Heinerth entered the submerged chambers of rock and ice inside the iceberg and saw sights that no human had ever seen before. They also almost died. Repeatedly. One of her peers almost froze to death; all three were trapped in a cave whose entrance had suddenly slammed shut. They were whipped around by currents, trapped in an unexpected chamber of ice, became slaves to another current, and became trapped again.

On top of that, the entire iceberg proved unstable. As Heinerth writes, “There was our iceberg—the cave that we had just been inside of, breaking into pieces, heaving up in the sea and sending these giant waves towards our boat. The whole square mile of ice we’d just been inside of was breaking apart and dissolving into the sea. I was just standing there, gobsmacked on the ship’s rail. I realized that if we had been in the water, we’d be dead.”