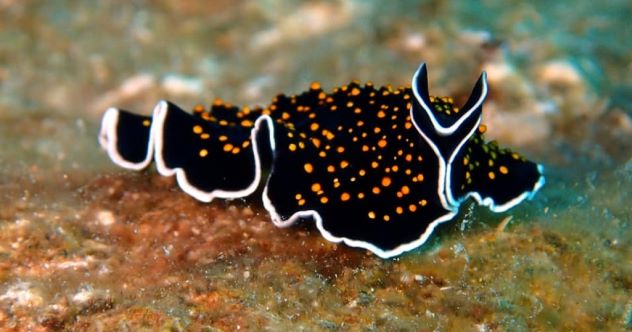 Life as a scientist, economist, computer expert, or structural engineer can be pretty boring. Even if you have a natural drive and passion for your subject, it requires grindingly long hours to master these highly complex jobs. Who could blame them for occasionally making up a stupid name and plonking it on one of their discoveries or inventions?

OK, so some of these entries were intended as a joke, but that will not diminish their hilariousness. Scientists with a sense of humor, we salute you. Excelsior!

10 Here’s Looking at You, Skid

Most people who have had a general physical exam with a doctor have had their reflexes checked. A quick tap on the knee, a little involuntary kick, and you’re free of serious nervous system disorders. But the knee tap isn’t the only way to check an involuntary reflex. Indeed, the knee jerk is one of many reflexes the human body is capable of. One of them concerns the eye. The brown eye, that is.

There is a type of rock-forming mineral found in New Zealand, Scotland, South Africa, Sweden, and the Northeastern U.S. that has quite a wonderful name. It was discovered and named near the town of Cummington, Massachusetts, in 1824. They named the mineral after the town.

Chester Dewey, according to mindat.com, “did not analyze the species, but noted its unusual physical appearance.” He later added that, despite the clear coincidence of the mineral being found near a place that bears a similarity to his chosen name, it was in fact based on a promise he had made to his wife at the breakfast table that morning…[2]

Contradictory terms are good for two things—as names of punk bands (like “The Razor Clouds” or “Shotgun Kittens”) or for laughing at. These linguistic quirks come up quite regularly, especially in the study of human behavior. We are complex organisms, perhaps the most complex on Earth (given our massive brains), and we should expect a great deal of seemingly contradictory aspects when describing ourselves. Mood, gains in knowledge, and changes in the environment all contribute to this ever-shifting profile.

Maybe the funniest sounding term in this regard is “Cute Aggression” (See! What a great name for a punk band). This is the expressed desire to bite, pinch, squeeze, or crush something perceived as extremely cute due to its intrinsic cuteness (without a desire for actually causing harm…probably).

You see a little puppy; it rolls around as it plays, sits up, and looks into your eyes. And sneezes. It isn’t uncommon for you to exclaim, “Ooooh, I could just squish you.” Followed by five minutes of gibberish baby talk. This phenomenon is an example of a “dimorphous expression,” like laughing during a funeral or gently striking your partner when they do something romantic. It is postulated that cute aggression, as with other dimorphous expressions, is an evolutionary adaptation to help humans regulate overwhelming positive emotion, thus aiding with caregiving.[3]

Flatworms, those gorgeous, scrap-of-colorful-silk-looking things you find floating around in tropical oceans, are actually weird little buggers. Like many organisms found in nature, they are hermaphroditic, having both male and female sex organs. Unfortunately, their mating ritual is also like many other organisms, too: traumatic and very violent.

Despite this surface-level similarity, flatworms have more of a Hollywood action movie feel to their copulation. Two flatworms will rear up when it’s time to mate, exposing their two pointy penises (like a rapier and a parrying dagger in human duels) and fighting to inseminate each other. If this were applied to humans, 17th-century duels would have been even more ridiculous/traumatizing/hilarious than they were in reality. The term for this mating ritual is gloriously anthropomorphized:

The “Flatworm Olympics,” of course, are a must-watch.

6 Really? You Couldn’t Think of a Less Suggestive Term

A discovery that you may not know is of Japanese origin is the accurate method for ascertaining the sex of a chicken. Japanese experts discovered a sure-fire way of ascertaining a just-born chick’s sex by checking the poop tract—males and females have a slightly different cornhole (great care must be taken in handling the tiny birds as they crush easily…apparently). The method, quickly implemented by the Zen Nippon school, cut the price of eggs worldwide overnight. Second-generation Japanese Americans found great success in turning this method into a lucrative line of work, virtually cornering the market in the States from the ’30s through to the ’60s, allowing for a boom in the agricultural/food industry.

Unfortunately for the English language, the term used for this process is “Sexing.” Sexing chickens. A person trained to do this is called, even more childishly, a “Chick Sexer.” This is because, unbeknownst to most, Japan is actually a population comprised solely of 13-year-old boys in a Playboy-magazine-littered treehouse from the movie Stand by Me.[5]

5 Won’t Somebody Pleeeease Think of the Children?

“Mothers Against”-type groups were big news in the 1980s. These censorious, deeply worried, and often super evangelical matrons made it their job to right all the Western World’s moral failings during that decade (and well into the ’90s too). Their crusade against various transgressions (otherwise known as “fun”) covered all manner of things, from heavy metal and rap music lyrics to violence in films, TV, and video games to pushing for teen abstinence from

The term was used by some scientists in the mid-1990s, their tongues firmly placed in their cheeks, after the discovery of a new protein in the genes of fruit flies (and later, related proteins called SMADs in many other species, including us). The piss-takingly-named “Mothers Against Decapentaplegic” acts to switch off the decapentaplegic gene, sending a message to the cell to stop dividing. This bizarrely named protein is now of special interest to the scientists who search for a cure to cancer.[6]

4 The Teeny Croakers of Madagascar

Naming conventions in zoology can be confusing. The correct taxonomic name for a lion is Panthera leo—this means that the animal colloquially referred to as a lion is cataloged as the “leo” species of the “Panthera” genus in the family “Felidae.” Got it? Good.

A recently discovered genus of tiny frogs in Madagascar has been given a far simpler, easily parsed name by a team from Germany: “Mini.” And yes. Yes, they are.

The various species have been given awesome species names to follow the genus. We have Mini mum, Mini ature, and Mini scule, all tiny enough to fit comfortably on your fingernail with room to spare.[7]

3 No, It Doesn’t Always Roll Downhill—Check the Chart

Sometimes, names and terms have extremely complex, byzantine derivations, sending etymologists on decade-long quests of discovery. Other terms are dirt simple. This is one of the latter.

An “SFD” is a high-level technical drawing used in the planning and improvement of sanitation and sewage systems, most often employed in developing countries. They are most useful in aiding planners against allowing effluent and waste to enter sources of drinking water and other such waterways—nobody wants shit in their river. Right?

And that is what SFD stands for—”Shit Flow Diagram.” Yes, that’s right, this integral tool in avoiding waterway pollution is called a shit-flow diagram. Was the word poop too infantile?[8]

Coding is a skill that, as we have been assured by tone-deaf and largely useless journalists, will be the new home economics or shop class in schools (as well as the new skill that workers whose jobs are soon to be taken over by automation should learn—like millions of truck drivers and coal miners will all soon be moving down to Silicone Valley…). Kids and adults in this brave new world will easily pick up enough coding to be able to build and run their own websites and decode a nuclear bomb.

And then we have “Brainfuck.”

This is a coding language invented in 1993 by Urban Müller with the sole intention of messing with coders. What is already a complex area is made all the more difficult by Brainfuck, the goal being to break down simple commands into micro-steps. Ad infinitum. It’s a Turing complete system, meaning it could be used to run a Turing machine, thus making it logically and practically sound. Just really, really, really, really annoying. Really.

So, instead of our students spending a couple of hours a week learning about capital cities or Shakespeare or long division, let’s give them a crash course on Brainfuck. And watch their tiny minds melt. Watch this space—the abacus will be making a come-back to a classroom near you![9]

Although a “creepy little mammal with oddly shaped teeth” would be a very uncharitable way to describe many English peers in the House of Lords, paleontologists thought that naming an extinct ungulate after a flamboyant songstress was A-Okay.

This little critter, a weird-looking cross between a deer and a giant shrew, was named after the “Born This Way” singer Lady Gaga, the “gaga” coming from her stage name and the “mini monster” referring to her fans (“little monsters”). Or it’s due to both she and the long-dead beast having “unusually large teeth that were much broader, with wide ridges around the base of its molars and pointed protrusions called cusps rising along their sides”…have you ever seen her teeth?

The creature roamed what is now southwestern Wyoming; this genus is a unique addition to the fossil record, having teeth unlike any similar specimen found in the Americas. Much as Lady Gaga is unique in being a transgressive Italian American singer who has a large gay following.[10]

What? Who’s this “Madonna” of which you speak?