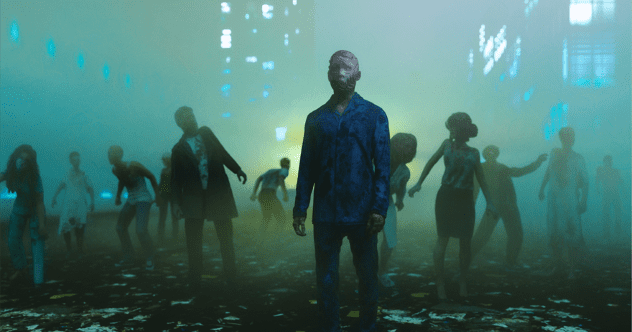 Humanity seems to love contemplating its own widespread destruction, leading to a rich variety of post-apocalyptic novels which imagine horrific situations for the few survivors who remain after the end of the world. Giants of the genre include Richard Matheson’s vampire plague in I Am Legend (1954), Stephen King’s flu pandemic in The Stand (1978), and Robert R. McCammon’s nuclear war in Swan Song (1987).

Post-apocalyptic stories are yet to be exhausted, though, and this list rounds up 10 of the best from the 21st century. From zombie outbreaks to killer viruses to robot uprisings, the novels on this list cover a range of grim apocalyptic aftermaths.

The Girl with All the Gifts is set twenty years after a fungus has wiped out most of humanity, turning the infected into mindless flesh-eaters called “hungries.” The novel begins at a remote military base where survivors are conducting experiments on infected children, who appear to be more in control of their minds and bodies. M. R. Carey’s post-apocalyptic tale is thrilling and suspenseful, but it also delves into the complexities of morality.

In a review for Tor.com, Niall Alexander declares that the novel has “an emotional core that most novels like it lack, content as they are to tell tales of the last days between bouts of particularly visceral violence.” The ethics of protecting the group versus the individual are debated throughout the book, giving this usually blood-sodden genre an intelligent boost. Carey’s zombie book was a hit, and only two years later, in 2016, the film adaptation was released to positive reviews. Carey also wrote a prequel in 2017, The Boy on the Bridge, which follows a team of scientists and soldiers trying to find a cure for the infection.[1]

Margaret Atwood is best known for her dystopian nightmare, The Handmaid’s Tale (1985), but her other speculative fiction can be just as nightmarish. Oryx and Crake is about a genetically engineered apocalypse, which the reader is told about in flashbacks by the main character, Snowman. Once called Jimmy, Snowman is potentially the sole survivor in a post-apocalyptic world, now filled with dangerous hybrid animals and primitive human-like creatures called Crakers.

Atwood creates a hellish future, presenting both a darkly detailed dystopian world and a terrifying post-apocalyptic one. Her bleak narrative is punctuated with macabre jokes. Though less known than The Handmaid’s Tale, Oryx and Crake was shortlisted for the 2003 Man Booker Prize for Fiction and the 2004 Women’s Prize for Fiction.[2]

Wool started life as a self-published short story in 2011 and steadily grew in popularity, encouraging Hugh Howey to continue developing the tale. The first five of the short stories were published together in the Wool Omnibus in 2012, and the sequels, Shift and Dust, were published in 2013. It is set in a future where the surface of the Earth has become toxic, and humanity is clinging to survival by living in the Silo, a subterranean city extending deep beneath the surface.

In an interview with Wired, Howey explains that the series “speaks to how fragile our existence is, how fragile our world can seem, and the struggle to put social systems in place that allow us to hold it all together.” The characters grapple with the challenges of their tightly controlled environment and seek out the mysteries of the Silo, despite the dangers of doing so. At the center of Wool is one question: Is safety or truth preferable? Apple is currently developing Wool into a series, with Rebecca Ferguson starring in a lead role.[3]

The Girl in Red is a post-apocalyptic retelling of the classic fairytale “Little Red Riding Hood.” In Christina Henry’s version, a highly contagious disease has decimated the population, and Cordelia, who prefers to go by Red, is venturing through the woods to reach the safety of her grandmother’s house. The story flips between past and present, giving us a window into Red’s background and her current dismal situation, which sees her trying to avoid both infected and dangerous people.

Henry’s heroine is used to people underestimating her because of her prosthetic leg, which has led to her being incredibly determined. The dangers Red faces are far scarier than the wolf in the original fairytale, and the gory parts of the novel are described in gruesome detail. Henry’s post-apocalyptic setting throws a surprising variety of threats at Red, and the tension continuously builds to an explosive ending.[4]

In World War Z, Max Brooks mixes Studs Terkel’s The Good War: An Oral History of World War Two (1984) with George A. Romero’s zombie films. The end result is a collection of individual accounts of the zombie apocalypse, which together provide a broad picture of the political, economic, and social impact that the virus had on the world. The zombie genre is now oversaturated, but World War Z remains unique.

Slate’s Nate Dimeo concludes that it is a “smarter-than-it-has-any-right-to-be zombie novel” and praises the audiobook version, which features a full voice cast, including stars like Mark Hamill and Martin Scorsese. The 2013 film adaptation starring Brad Pitt is similar to the book only in name, favoring action thrills and zombie kills over the interesting multiple perspective narrative of the novel. World War Z’s breadth allows it to comment on a number of real-world issues while also delivering the zombie scares expected of the genre.[5]

Many of the books on this list are about the survival of humanity after an apocalypse, but Station Eleven focuses on the survival of human culture. A flu pandemic, known as the Georgia Flu, quickly rips through the population, killing the vast majority of people. The non-linear story switches between pre- and post-apocalyptic settings, connecting the various characters through the actor Arthur Leander, who dies onstage during a performance of Shakespeare’s King Lear just before the pandemic hits. Twenty years post-pandemic, the story follows the Travelling Symphony, a nomadic group of actors and musicians.

Station Eleven presents a lighter apocalypse than most, but it is not without its dangers. Emily St. John Mandel expertly fuses an exploration of the importance of art with the threat of a violent prophet and his growing cult. In 2015, the novel won the Arthur C. Clarke Award and the Toronto Book Award, and in 2021 it was adapted into a miniseries by HBO Max, starring Mackenzie Davis and Himesh Patel.[6]

Set after an unknown extinction event that has left the world barren, cold, and virtually devoid of life, The Road tells the story of an unnamed father and son undertaking a grueling journey in search of warmer weather. They face starvation, frigid temperatures, and cannibalistic survivors. It is an unrelentingly bleak tale with stark prose to match. The tender relationship between the father and son feels like a beacon of humanity cutting through the darkness that lies within this post-apocalyptic world.

McCarthy won the Pulitzer Prize for Fiction for The Road in 2007, and it ranks at number 17 on The Guardian’s list of the best books of the 21st century. This depressing but poignant novel was also made into a well-received movie in 2009, directed by John Hillcoat and starring Viggo Mortensen and Kodi Smit-McPhee as the father and son.[7]

C. A. Fletcher’s novel riffs on Harlan Ellison’s novella A Boy and His Dog (1969), but their narratives are very different. Ellison’s is set in the USA after a nuclear war, while Fletcher’s is set in Scotland after the Gelding, an event that leaves most of the world’s population infertile. Also, Fletcher’s canine companions are not telepathic, and his protagonist is not sex obsessed. Kirkus chose it as one of the best science fiction novels of 2019.

The story is told from the point of view of teenager Griz, who lives on an island with his family and dogs, Jess and Jip. He rarely interacts with other people, but then a stranger arrives and steals Jess away in the middle of the night. Griz sets off with Jip to get Jess back, journeying through the near-vacant but still dangerous ruins of the old world. The descriptions of the crumbling cities are haunting and melancholic. This one is definitely for dog lovers, as the human-canine relationship provides the emotional center of the novel.[8]

This post-apocalyptic novel is set 15 years after a Terminator-like war between humans and robots that left mankind extinct. In Sea of Rust, Brittle, a Caregiver robot, searches for spare parts and attempts to evade the One World Intelligences, which are trying to absorb all robots into a hive mind. Despite being populated by robots, the novel features a great deal of philosophical thinking about death and what it means to be human. Sea of Rust skillfully weaves this pondering with light-hearted humor and fast-paced action.

C. Robert Cargill is the co-writer of hit movies like Sinister (2012) and Doctor Strange (2016). So his novel has a cinematic feel to it, with its well-described world and tense, action-packed scenes. It was one of the Financial Times’ best books of 2017 and was shortlisted for the Arthur C. Clarke Award in 2018. Cargill recently wrote a prequel novel, Day Zero (2021), which hints at Ellison’s A Boy and His Dog. It details the start of the robot apocalypse from the perspective of Pounce, a tiger-shaped nanny bot, and Ezra, his human charge.[9]

Justin Cronin’s The Passage, which continues in The Twelve (2012) and The City of Mirrors (2016), feels epic in the same way as King’s The Stand. It starts by detailing the origin of a vampire virus and its outbreak. It then jumps 93 years forward to a post-apocalyptic world where pockets of humanity struggle to survive in the face of the overwhelming threat posed by the vampires. Not only vast in its timeline, the novel also includes a huge cast of characters and traverses thousands of miles of America.

While The Passage is lengthy, it earns its page count. The time spent chronicling the outbreak adds a realistic depth that enriches the world-building of the colony set in the future. Cronin’s editor, Mark Tavani, explains that this style of writing is “very Stephen King. He creates a realistic world, gets you comfortable, and then crazy things happen.” The Passage was even creating buzz before it was published, with Ridley Scott optioning the filming rights but ultimately making a disappointing series in 2019, which was canceled after just one season.[10]