Name a holiday when evil spirits are all around you and magic and mysticism is celebrated. Not Halloween, but Midsummer. In the Northern Hemisphere, the longest day of the year falls around June 21, when the sun’s rays are perpendicular to the Tropic of Cancer at 23°30′ North latitude.

It is called the summer solstice and has been celebrated around the world since time began.

Shakespeare’s A Midsummer Night’s Dream depicted the fairy world’s riot of mischief on this special night. Today, folklore still plays an important role, and sacred rituals are observed by different groups to mark the start of summer.

Welcome to the quirky world of Midsummer.

Related: 10 Unusual Festivals Around The World

Sankthansaften is the Danish midsummer festival named after Sankt Hans—St John the Baptist, who was born on June 24. As with Christmas Eve, the holiday is celebrated the night before on June 23 along with the summer solstice—the date of which can move due to shifting calendar days in a year.

Midsummer is welcomed by bonfires topped with an effigy of a witch called “heksedukke,” whose cloth body is stuffed with firecrackers. According to legend, when the witch doll explodes, she is set free to fly away to Mount Brocken in Germany—a legendary gathering place for witches from around the world. The bonfire tradition stems from the Middle Ages when people suspected of witchcraft were burned at the stake throughout Europe. The custom of adding a witch doll began in the 1920s.

The fires are lit at around 10 pm, and revelers sing the traditional anthem “Midsommervisen” to mark the longest day of the year, where some parts of Denmark will enjoy 18 hours of daylight.[1]

The Sun Dance is a sacred ritual of pain and self-sacrifice practiced by some Native American tribes. The ceremony starts at the time of the full moon closest to midsummer, when the sun is at its highest point in the sky and the sage plant—a symbol of healing—is ready to pick.

Tribes from the Great Plains, including the Lakota, Cree, and Blackfoot, spend all year preparing for the important ritual.

The theme of the Sun Dance is healing and renewal as dancers give thanks to the sun by sacrificing their own flesh in an act called “piercing.” The grueling process sees wooden skewers inserted under the skin of a dancer’s chest or shoulder blade. Rawhide cords are attached to the skewers, which are then tied to a central Sun Pole. The men dance around the pole for hours, pulling back until the flesh rips.

The tribes believe that without the Sun Dance, the earth will lose its precious connection to the universe.

Western settlers’ squeamishness at the Sun Dance caused it to be banned by the American government around 1895, although some tribes continued the practice in secret. In 1978, President Carter signed the American Indian Religious Freedom Act, ensuring that all Native American religions were protected by law.[2]

Deep in Eastern Europe, the winters are long and harsh, so midsummer is welcomed by a celebration called Ivana-Kupala. It was initially a pagan fertility ritual named after the summer sun “Kupalo” but was later combined with the birthday of St John or “Ivan.”

Water and fertility are the main themes—Kupala morning dew is believed to have healing properties, and people bathe in outdoor waters to cleanse both body and soul. No one sleeps on Kupala night as it is said that witches and vampires lurk in the shadows, so bonfires are lit to keep them at bay. Young men show their bravery by leaping over the flames while young couples jump bonfires together to prove the strength of their relationship.

Legend has it that a magical fern will appear in the forest on Kupala night and whoever finds it first will be bestowed with good luck.[3]

Shetland is a remote archipelago lying between the Atlantic Ocean and the North Sea, 230 kilometers (143 miles) north of Scotland. At 60 degrees North, its position affords the islands around 19 hours of daylight at midsummer. On the longest day of the year, the sun rises at around 4 am and sets again at 10:30 pm.

Da simmer dim is an old Shetland term that refers to twilight on the islands when the sun dips just below the horizon for a few hours at night, filling the skies with a milky white light. As the sun rises, the light changes and casts an orange glow.

Shetland is closer to Norway than mainland Scotland, and so at midsummer, early Norse settlers celebrated Baldur, the god of light. Islanders marked the day by building bonfires stacked with fish bones, straw, and seaweed—set alight with fish oil.

Young couples would follow an ancient Shetland tradition of meeting secretly as the sun went down. The lovers would pick a stalk of ribwort plantain, which grows wild on the islands. The buds were removed and then hidden, and if new buds sprouted on the plant, this was a sign that the couple was destined to marry.

Since 1982, bikers from all around the world have caught the ferry to the tiny islands to celebrate midsummer at the Simmer Dim bike rally. Around 400 bikers gather to witness the magical skies on the shortest night of the year.[4]

Fairbanks is Alaska’s second-largest city and experiences a unique midsummer. At 65 degrees north latitude, the former gold rush town enjoys the Midnight Sun season from April to August—a time when the sun never fully sets. This culminates at the summer solstice on June20/21, when the sun dips no lower than 6 degrees below the horizon, and the area is plunged into near 24-hour sunlight.

“Civil twilight” is the official term for “usable daylight hours,” meaning the amount of light a pilot needs to see objects on the ground. From May 17 to July 27, Fairbanks has 70 days of 24-hour official civil twilight. On the longest day—June 21—the sun will typically set at 12:47 am and rise again at 2:59 am.

As the earth rotates, the Northern Hemisphere is tilted nearer to the sun, causing sunlight to fall at a steeper angle. The further north you venture, the more hours of daylight you will experience at the summer solstice. Alaska’s position at 315 kilometers (196 miles) south of the Arctic Circle explains this phenomenon.

Since 1906, the Alaska Goldpanners have hosted the Midnight Sun baseball game on June 21. It begins at 10:30 pm, finishing around 1:30 am, and the floodlights have never been turned on for the duration of the game.[5] 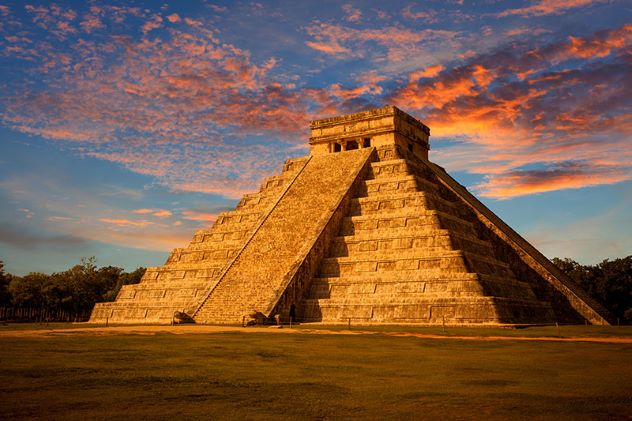 Chichen Itza is an ancient Mayan site on the Yucatan Peninsula, Mexico, built around AD 400. By AD 600, it was a bustling city and home to thousands. However, something caused the population to vanish, and by the time Spanish explorers arrived in the 16th century, it was a ghost town.

The Mayans were fascinated by astronomy and closely followed the changing seasons when planting crops. The main pyramid at Chichen Itza comprised 365 steps in line with the days of the year and was designed as an early type of calendar—alerting the Mayans to the arrival of solstices and equinoxes.

Every year around June 21, the early morning sun filters into the north and east sides of the pyramid, leaving the south and west sides in darkness. so the structure appears to be split in half. To the Mayans, this light display was the start of summer.

Legend has it that if you clap your hands at the base of the steps, the echo will mimic the sound of the Mexican quetzal bird—a sacred Mayan symbol.[6]

4 The Power of Trees

Most Midsummer celebrations are a way to reconnect with the earth at a time when nature is in full bloom. Many can be traced back to early pagans who regarded trees as sacred spirits with magical powers.

The Celtic people of Britain praised the oak tree as King of the Forest due to its strength and longevity. The Celtic word for oak is duir, meaning doorway. They believed the oak tree’s roots were a direct link to the underworld and the dark days of winter which lay ahead.

Druids also worshipped the oak tree due to the presence of mistletoe—a sign of healing and fertility that seemed to grow only on trees that had been struck by lightning. In fact, mistletoe is a parasitic plant that would creep out of a gap in the trunk caused by a lightning bolt.

Druids hailed the beech tree as the “Queen of the Mother of the Woods” and the source of all wisdom. In Celtic tree mythology, it was called the “tree of wishes.” If a beech branch fell, it was seen as an invitation from the wishing fairies to write on the branch and push the stick into the earth where the wish would be taken to the underworld for the Fairy Queen to read.[7]

Alesund is a municipality in Norway’s Western Fjord County, stretching across several islands and surrounded by the Atlantic Ocean. This makes it the perfect location for the world’s tallest man-made bonfire.

The event, called Slinningsbalet, is held on the Saturday closest to June 23. Traditionally, bonfires have been lit all over Norway at the summer solstice—to signify the sinking flames of the sun.

Locals build a tower made from wooden crates and pallets stacked on top of each other, sometimes as high as 40 meters (131 feet). It takes up to 30 people working day and night to finish the structure, and crowds then gather to watch as volunteers climb to the top. There, they light a fuse placed inside a barrel at the highest point and carefully make their way back down as the flames take hold.

Hundreds of people arrive in boats and on foot to watch the tower burn for hours until it collapses into the ocean, marking the start of midsummer in Norway.[8]

Midsommar in Sweden is one long party. The outdoor festival of food, drink, and dancing begins on the weekend nearest to June 21. A large green maypole “majstang” is at the center of celebrations, a custom that originated in 17th-century Germany.

Pickled herring and nypotatis—potatoes with dill—are served at picnics, followed by drinking songs and dancing around the maypole.

The holiday is a time of magic and superstition in Sweden, as folklore dictates that if a young woman picks seven different flowers in silence on midsummer eve and places them under her pillow, she will dream of her future love.

Romance is in the air—an old Swedish verse reads:[9]

“Midsummer night is not long, but it sets many cradles to rock.”

Stonehenge is a world-famous stone circle in Wiltshire, UK. Sarsen stones were placed in the center of a stone circle around 2500 BC to align with the movements of the sun.

On the summer solstice, if you stand in the center of the circle, the sun will spectacularly rise to the left of an upright stone known as the Heel Stone. The people of the Neolithic and Bronze Ages who built Stonehenge were farmers and herdsmen, so the changing seasons were vital to their survival.

Today, Stonehenge is a magnet for Druids and pagans who regard it as their temple, along with Wiccans and nature lovers everywhere.

The atmosphere at Stonehenge has not always been so tranquil. In June 1985, a community called the “Peace Convoy” arrived to stage a festival. Police had set up roadblocks, and when the convoy broke through them, 1,200 police officers arrived at the scene to break up the party. This became known as the Battle of the Bean Field, resulting in the largest mass arrest of civilians since World War Two.[10]

Top 10 Unsettling UFO Evidence That Will Make You A Believer
Top 10 TERRIFYING Secrets To The Afterlife Found In History | Marathon
If You See This In The Ocean, Get Out Fast
Jeremy Renner’s Latest Health Updates #shorts
Top 10 Discontinued Fast Food Items We All Miss