Over the past 25 years, social media has changed the world as we know it—for better and for worse. The various social media platforms have helped us stay in contact with friends and family members over thousands of miles, reconnected those we have fallen out of contact with, and provided a whole new means of communication.

The toxic side of social media is something with which I’m sure you are all more than familiar. Some of us choose to weather the storm and try to fight through the digital animosity. Plenty more are opting out and have decided to log out of social media altogether.

But for some people, the rise of these platforms has been nothing but a waking nightmare. Facebook, Twitter, Instagram, TikTok, you name it. This list recounts ten awful tales that all revolve in some way around social media, including accidental deaths, abuse, fraud, data collection, and a strange tale involving a false Banksy allegation. 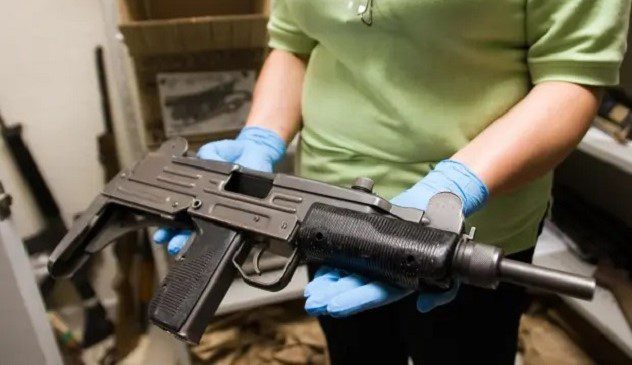 Experts have warned time and time again about the extreme lengths young people will go to for attention online. Sadly for one 15-year-old in Mexico, she paid the cost with her own life.

Yazmin Esmeralda discovered a submachine gun stashed in a closet at her grandmother’s house. She asked her younger brother to film her with the gun, hoping it would look good on TikTok. But tragically, she shot herself in a freak accident while making the video. Reporters say she died immediately.

The gun that took Esmeralda’s life, a 9mm Uzi, was once used by the Mexican army. But the military has now replaced that gun with a safer model. The army cited its erratic tendency to fire as one of the reasons for the decision.

Experts looking into the case believe it was the country’s long-standing drug culture that attracted Esmeralda to the weapon. María Teresa Guerra Ochoa, a state official in Sinaloa, explained how many in Mexican society idolize traffickers and gangsters. “Many of them come from poverty and so they’re seen as symbols of success,” she told the press.[1] 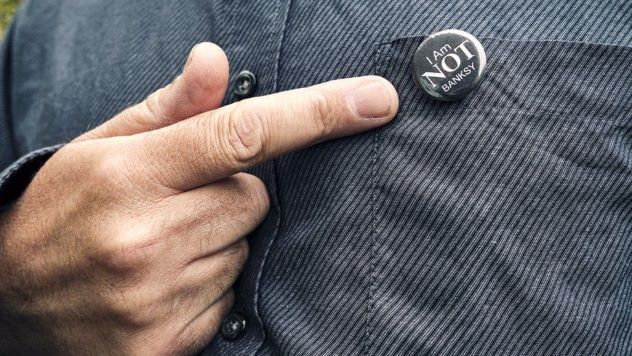 Banksy. The iconic British street artist is something of a cultural phenomenon, creating eye-catching works that sell for millions at auction. His mystique is all part of the allure. Although there have been many rumors over the years, nobody knows for sure Banksy’s identity to this day.

But in 2022, strange whispers began to spread online, pointing the finger at an unknown council member from a small town in Southwest Wales. It didn’t take long for the bizarre claim to go viral, and soon William Gannon—a 58-year-old councilor for Pembroke Dock—found himself at the center of a full-blown conspiracy claiming that he was Banksy. Things grew to the point that he received a deluge of phone calls and Facebook messages asking about his connections to the elusive star. Gannon described the experience as like “living in a Kafka novel.”

But it appears that people don’t realize when a joke has gone far enough. The attention became so huge that Gannon had to resign from his role as a councilor. He now plans to clear his name by handing out “I Am NOT Banksy” badges to the people of Pembroke Dock.[2] 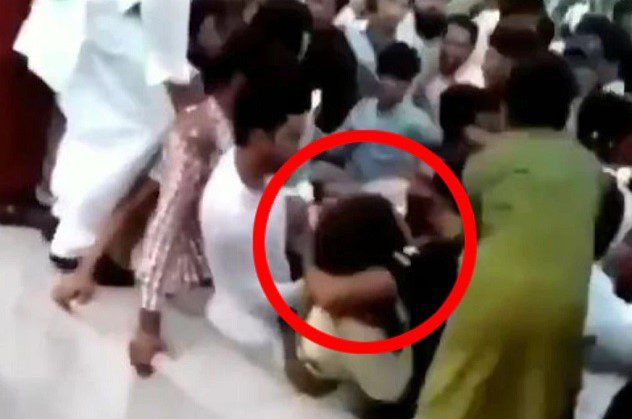 The name Ayesha Akram might not mean much to many of the people reading this, but in Pakistan, she’s something of a social media star. In August 2021, she and a group of friends traveled to the Minar-e-Pakistan monument in Lahore to record people celebrating the country’s Independence Day.

But as they were filming in Iqbal Park, hundreds of men began swarming around them. At first, they only took selfies, but the mob soon turned violent. As Akram later described to reporters, she was completely surrounded by people who groped her and tore away her clothes, leaving the influencer with no room to escape. Those who tried to intervene found themselves blocked off by the sheer enormity of the crowd. In total, the attack is reported to have lasted around two and a half hours, with Akram struggling to breathe at points.

The incident drew criticism from many Pakistani officials and public figures. “The full might of the Govt will come down upon those involved in the horrendous Lahore incident,” tweeted Hashim Jawan Bakht, Punjab Minister of Finance. “Society is judged by its treatment of women and the freedom they have. This is not what Pakistan stands for.”[3]

The debate around what should and should not be permitted on social media rages on. Mark Zuckerberg and others face the challenge of having to crack down on genuine hate speech without impeding people’s freedom of expression.

But many feel that Facebook is far too lenient on what they perceive to be grossly harmful content. One particularly egregious example is Ethiopia and the online vigilantes who have used the platform to call for the massacre of ethnic groups. The previous employee turned whistleblower Frances Haugen accused the company of “literally fanning ethnic violence,” with one Ethiopian media official commenting that Facebook is “standing by and watching the country fall apart.”

A recent investigation by The Observer and the Bureau of Investigative Journalism found that posts, often untrue, on social media inflame the country’s ever-worsening conflict. Thousands of people have died in the Tigray region since the conflict began in November 2020. Many in the region have reported a direct link between online hate speech and the killing of their relatives.[4]

In the world of fitness influencers, Brittany Dawn Davis holds a certain amount of clout. The U.S. social media star boasts over a million followers across her many platforms, on which she sells personalized workout and nutrition plans.

Or at least, she claims to sell personalized plans.

The fitness schedules arrived on time, but after speaking to each other, Davis’s followers learned that these supposedly customized plans were near identical. Customers paid $92 to $300 for an experience that they were told included personal face-time with the influencer. This never materialized.

Davis did apologize to her followers in a YouTube video, although the clip has since been deleted. However, many of her customers are still waiting to be refunded. Some were offered partial-to-full refunds, but only on the condition that they signed non-disclosure agreements. In February 2022, the state of Texas filed a lawsuit against Davis for “deceptive trade practices” online. They seek damages from $250,000 up to $1 million.

Davis continues to work as an influencer but has shifted to posting about religion and wellness. She now charges clients $125 for a visit to her chain of female-centered Christian retreats.[5]

TikTok star Mary Anne Oliver-Snow, better known online as yandere.freak, probably never imagined that a night of drinks would end with her being charged with manslaughter. In January 2021, she met up with friends in Houston, Texas, for an evening of cosplay and revelry. The group was all dressed as characters from Batman, watching Gotham, and was, as police reported, “drunk, laughing, messing around.”

At some point in the night, the TikTokker produced a handgun, showing her drinking buddies how it resembled the one carried by the Penguin. She later claimed that her ex-boyfriend had left the weapon with her and that she had no idea it was loaded. Helen Rose Hastings, a friend she had known since high school, was joking around with Oliver-Snow, saying, “Ooooh, shoot me.” She then aimed the firearm at Hastings and pulled the trigger. Tragically, the gun fired, and Hastings lost her life.

At the time, the victim had been a student at Oberlin College in Ohio, in her first year. Friends told the school paper how they would remember Hastings for her “laughter, enthusiasm, and compassion.”[6]

The video-sharing app TikTok has surged in popularity over the past few years, amassing a huge global base of users. Despite an age restriction of 13, a significant portion of accounts are owned by children. A 2020 report in the UK found that 42% of eight to 12-year-olds used the app, a figure which experts claim raises serious questions regarding safeguarding and data collection.

The issue has become such a worry that in 2021, Anne Longfield, former children’s commissioner for England, began a landmark case against the app. Longfield told the high court that she believes TikTok is violating UK and EU children’s data protection law, harvesting data from millions of children without legal consent, proper warning, and transparency. She believes that ByteDance, the Chinese tech company behind TikTok, may have breached the privacy of 3.5 million children in the UK alone.

This isn’t the first time ByteDance has found itself in hot water over children’s data collection. In 2020, U.S. officials found the firm guilty of illegally collecting the personal data of children under 13. They were fined a record $5.7 million (£4.2 million).[7]

In recent years, narcotics experts have warned about the worrying trend of fake drugs being sold on social media platforms like Snapchat and Instagram. The number of fatalities among young people due to fentanyl in pills is rising at a staggering rate.

High schoolers and college-age youths are buying what they believe to be recreational drugs online. But many of these dodgy Xanax and Percocet-type pills are filled with fentanyl, and in many cases, the repercussions have been lethal.

Fentanyl is relatively inexpensive to manufacture, which is why the synthetic substitute is often used in knockoff pills. But the potency of fentanyl is 100 times higher than heroin, and the strength of the counterfeit drugs tends to vary wildly. Analysis by the Drug Enforcement Administration found in 2021 showed that two out of every five fake pills contained a potentially deadly amount of fentanyl.[8]

It’s no secret that sometimes school students can absolutely detest their teachers. But what happens when they go so far as to start a campaign of online abuse?

In 2021, Britain’s Department for Education announced they were in talks with TikTok after several complaints from school principals about offensive and humiliating accounts aimed at teachers. They told reporters of new laws being brought in against harmful content to usher in “a new era of accountability for these social media companies.”

Some schools have even gone so far as to threaten to involve the police. Several educational establishments have written to parents, informing them that if their child is caught with an abusive account, they could be kicked out of school.[9]

In the aftermath of this appalling bloodshed, something strangely chilling happened on social media. Across several platforms, especially Instagram and TikTok, people began setting up fake accounts claiming to be the gunman. They took images from his social media accounts, which have now been removed, and made it look as if they were the mass murderer. The day after the shooting, reporters found over half a dozen imitation accounts on Instagram and a similar number on TikTok.

This isn’t the first time social media users have tried to mimic a mass killer. In 2018, after a former student killed 17 people at a high school in Parkland, Florida, several fake profiles appeared on Instagram, with some reposting images from the shooter’s account. A similar thing happened in December 2021 when four students were killed in Michigan. One of the dummy accounts was even looking to make money from the event, offering to promote other users’ accounts for a small fee.[10]