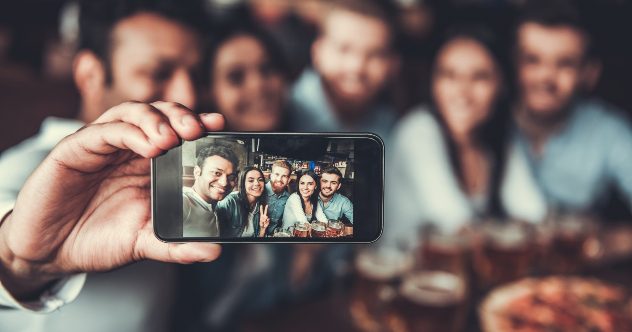 There seems to be little privacy in the modern world. Modern technologies gather information about us, and we have little control over what happens to this data. We all use the internet, and every time we do, we add to the stock of information available to businesses and the authorities. Most of us accept this as a price we pay for being connected. But it also illustrates that we don’t value privacy as we once did.

We are creatures of habit, and our habits ground us in the world and make our environment more familiar and comfortable. Most of our practices are harmless and have no impact on others. But we have developed some new habits, and old ones have adapted to help us navigate the new age of technological wonders.

The habits we will discuss here are common enough, but if we stop to think about them, they are a little odd. Some of these habits show that privacy is no longer one of our primary concerns. Does it matter? I’ll leave you to decide.

You’re sitting in a restaurant having a quiet conversation with your partner when a phone rings at the next table. You are then forced to listen to one side of a conversation (sometimes both sides if the speaker is on). Irritated but simultaneously fascinated, you discover that A really hates B, that C is an idiot who doesn’t know what he is doing, and that C is seeing D on the side. You don’t know these people and never will, but you now know more about them than you ever wanted to.

Some people don’t seem to realize that there are boundaries between the private and public worlds. And is it just your imagination, or is the phone conversation louder than it should be? No, it’s not your imagination.

In 1909, a French doctor called Étienne Lombard discovered that people talk at a volume that matches the noise level around them. We often think there is more noise than there actually is and talk more loudly than necessary—especially on the phone.

We can’t all be as inventive as Shakespeare when it comes to swearing, but most of us have a few choice words that we only roll out on special occasions. We usually know when and where swearing is appropriate—few people would swear in church, but many might when watching a football game with friends.

If used sparingly, swearing is a safety valve that makes your feelings very clear and very public. Some people swear too much and season every conversation with colorful words. This makes swearing counter-productive as well as tedious.

Studies have shown that swearing helps to reduce stress, builds bonds among peers, and is often a sign of fluency, intelligence, and honesty. Naturally, you have to use swear words sparingly and save them for the right moment. In other words, swearing as a habit just makes a public spectacle of the swearer. Shakespeare was the master of the right word at the right time.

My wife refers to my office as “the black hole” because my desk is heaped with papers, stationery, and books. This untidiness in an open office means that your work (and yesterday’s lunch) is in public view. You should never leave confidential stuff lying around for anyone to see—nor yesterday’s lunch, for that matter. While leaving private information, lying is always bad form, and in some cases, it’s illegal. HIPPA and FERPA laws protect patients’ and students’ information, for example.

An untidy desk may show you are creative and too busy to tidy up. On the other hand (which is true in my case), it may simply show that you are lazy. Whatever the reason, it is a very public demonstration of your personality.

People who keep their desks tidy might be more organized if not as creative as their messy colleagues—there is room for both types of people in an organization.

Most people—96%, according to some studies—have conversations with themselves. But these chats go on in the head. Some 25% of people talk to themselves out loud regularly. This habit can help you work through problems and hear how a phrase might sound. A lot of people will mutter the opening words of an email to themselves before they start clattering away on the keyboard.

When you think about it, it’s a strange habit indeed. Why should talking aloud to yourself clarify things better than just thinking about them? But it seems to work for many of us.

There’s a big difference between rehearsing the first line of an email out loud and constantly talking to yourself disjointedly about anything and everything. The second might indicate a mental health issue, although nowadays, with mobile phones and Bluetooth hearing devices, it’s difficult to be sure.

6 This Is My Lunch

Open your Facebook page, and I am sure that you will find that one of your contacts has posted a photo of some trivial aspect of their life that few, if any people, will have any interest in at all. Do you really want to know what Tom had for lunch?

According to a report in The New York Times, 94% of people post on social media because they want to inform, amuse, and help others. That’s all well and good, but some people take the habit to extremes and post the most trivial rubbish. Others share posts and photos they may regret one day—and the internet never forgets.

Social media platforms have become an important part of our lives in a very short period. That people enjoy using them and find them useful is certainly true. Unfortunately, they have their dark side, and young people can be especially vulnerable to abuse.

We need to educate our young people about appropriate use and the need for caution when using these platforms. This includes parents who post content such as a back-to-school picture with their kid in front of a school sign. A quick Google search will show any creep where your child now attends school. Not cool.

Next time you are in a restaurant, look beyond the guy talking too loudly on his phone, and you will see a group of people all staring at their screens. Chances are that some of them will be texting their friends.

Why? Are the people at their table too boring to talk to? Why do we need to know exactly what our friends are doing at all times?

And why don’t people send all the information in one text? Why do they message us sentence by sentence? This is not a face-to-face conversation, with texting you answer the first point and then discover that it’s irrelevant because the sender contradicts the first:

A: Is there a meeting on Monday?

A: Because I can’t go on Monday.

We’re social creatures, and connection with others is very important. Most of us can’t resist a good piece of gossip. It’s a social lubricant that is usually harmless enough. However, we should always be aware that gossip implies that an aspect of another person’s life is now in the public sphere.

The problem with gossip is that it is rarely based on complete information, and as it spreads, it becomes more fanciful until, like Chinese whispers, it bears little relationship with the facts.

We should be mindful of what we say and the damage that gossip can cause.

Smoking, many people will tell you, is a filthy habit. Over recent years, smokers have found that they are not welcome in public places. This should have the effect of driving smoking underground to become a private vice. But this isn’t what happens.

Smoking is addictive; some say it’s easier to quit taking heroin than to give up smoking. A heavy smoker can’t go through an entire workday without a cigarette, so smokers leave the workplace and walk to the nearest place where they can indulge their habit. Here, in all weather, smokers gather in groups exposed to the disapproving eyes of the public.

Smokers reinforce each other’s addiction and form an “us versus them” mentality. Meanwhile, they’re not getting any work done.

Interestingly, psychologists have discovered that putting horrible photos on packs of cigarettes often has the opposite effect to that intended. After a short while, a dedicated smoker associates the photo with cigarettes, and this serves to reinforce the habit.

Some people have the habit of persistence. This can take various forms, from the irritating person who won’t stop going on about the same tired subject to the person who keeps trying until they get something right. This habit can keep someone in a job they hate for years or drive a scientist to keep trying until they reach the desired result.

Strangely, many people will simply keep going and never give up. It can be very admirable in many ways, but sometimes it can be very irritating. Regardless, the person will seek out others to share their woes or triumphs with in great detail—ones we really don’t want to know or have any business knowing. The trick is to know when to stop.

In search of a perfect selfie to post on Facebook, Anna, an 18-year-old Romanian, lay on top of a train car. She stretched out a leg to get the ideal pose but touched an overhead wire. She burst into flames as 27,000 volts coursed through her body. She didn’t live to see her photo posted.

Selfies are everywhere. Fortunately, not many are as deadly as Anna’s, but most are intensely irritating and very public. Why do people think others are so interested in their badly-centered, unfocused portraits?

Taking selfies is a narcissistic habit that only feeds our desire to be the center of attention. It also reveals a lot about our lives and where we are at any given time. Planning a vacation? Hold on to those selfies to post when you return. Or you might just return to an empty house.