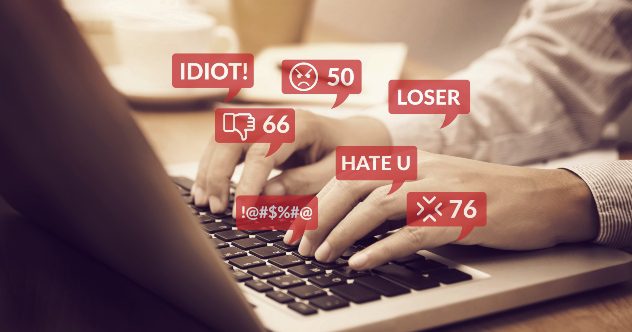 Facebook’s motto is “Give people the power to build community and bring the world closer together.” An admirable sentiment, but there are trolls in the undergrowth that seem hell-bent on dividing communities and forcing people further apart.

We tend to think of trolls as sad people who enjoy hurting others. They usually don’t personally know their prey and seem to delight in the damage that they cause. Others troll for political or commercial reasons, but a troll’s hallmark is self-centered arrogance. A troll is someone who doesn’t know the meaning of empathy and is unwilling or unable to keep their views to themself.

Unfortunately, we will never be able to completely shut trolls down because there is often a very fine line between abusive content and the right to free speech. We don’t want to close down comment sections, and moderating posts can often lead to arbitrary decisions about what is acceptable and what is not.

It’s a problem we must live with if we want a free exchange of views. Even with trolls inundating the internet, here are ten times when the internet shut down the trolls.

Related: 10 Of The Creepiest Corners Of The Internet

J. K. Rowling, the author of the popular Harry Potter series, is very private. Even so, she is not shy when giving her opinion. Many people think that the author’s views are not politically correct, but Rowling doesn’t care what other people think. She has her opinion and is happy to share it.

Rowling doesn’t personally attack people, nothing is insulting about her tweets, and she is more than ready to defend herself. As this example shows:

Troll: “Is it lonely up there on your high horse?”

Rowling: “Gosh, no, I’ve got several million women sitting beside me.”

Notice that the troll doesn’t insult Rowling; he is more subtle in suggesting that Rowling’s status somehow disqualifies her opinions. It doesn’t, as Rowling demonstrates in her response. Rowling’s replies to trolls show a quick wit and a knack for hitting the nail on the head. They would make for an amusing and interesting book in their own right.

Trolls often seem to have an inflated opinion of themselves. Usually, the best way to puncture them is with wit.

A fan posted a harmless video on social media showing her reaction to what Taylor Swift had done. Someone anonymously commented about the fan:

“UR UGLY TO BE COMPLETELY HONEST…okay.”

Well, unnecessary, hurtful, and uncalled for. Adding “to be completely honest” is a trademark of trollers. It suggests that the poster is reluctantly being honest. He isn’t, of course; he is being nasty for the sake of being nasty.

It wasn’t the target fan who shot back a reply, but Swift herself. She replied:

Swift did the right thing here. She supported her fan and showed the anonymous poster that he was out of line. Swift’s reply showed that she found the comment unacceptable and helped strengthen a sense of community among her fans.

Gigi Hadid is a supermodel who received a message that said that she should:

“Practice how to walk properly instead of having a new boyfriend every two weeks.”

In a short text, the troll criticized both her professionalism and made a snide remark about her romantic life. People in the public eye must accept criticism about their work, and such comments can be constructive. However, private life is private and shouldn’t be open to public debate.

“My walk can always get better; I hope the unrelated bitterness in [your] heart can too.”

Short and to the point.

When celebrities Henry Cavill and Natalie Viscuso began a relationship, it seemed that not everyone approved. Henry’s Instagram account soon received posts from people who didn’t approve and some who were downright abusive. Henry decided to take a stand; he posted:

“I know it can be fun to speculate, to gossip, and to dive into our own personal echo chambers on the internet, but your ‘passion’ is misplaced, and it causes harm to the people I care about most. Even your most conservative of negative assumptions about both my personal and professional life just aren’t true.”

His post was reasonable and seemed to have shamed many of the trolls into silence. But this isn’t always the best tactic, the trolls had provoked a response, and they got it. It breaks the cardinal rule of “Don’t feed the trolls.”

Nicola Roberts was a singer with the Girls Aloud group; she had also had a relationship with an ex-soldier named Carl Davies.

After the affair ended, Davies sent her over 3,000 messages, some of which threatened to stab and burn the singer. Her tactic was often effective, one of not answering any of the messages. Often, a troll is just hoping for a reaction.

But Nicola made copies of all the messages and handed them to the police. The courts didn’t send Carl to prison but gave him a restraining order. This seemed to do the trick as far as Nicola was concerned. But Carl later did the same thing with another woman. Under an assumed name, he threatened the woman and said that her daughter would be the target of rape. This time, he went to jail.

The men of the England football team haven’t won anything on the international stage since they won the soccer World Cup in 1966. In 2020, it looked like they might have a chance at last. The European international finals were on home soil, and England had a skillful squad of players.

The team reached the final and met Italy. Many believed that Italy was past its best, but on the day, the Italians played a well-controlled match that saw the game end in a 1-1 draw. The final went to penalties, and Italy won.

The black players on the English squad immediately became the target of abuse on all social media platforms. Most fans expressed their disappointment with the entire team—and it’s true that no English player did himself justice on the day. But why did many people focus only on the black players? The British like to claim that racism is a thing of the past. It isn’t.

“We’ve all been shocked by the way racist trolls have been targeting footballers recently.”

The England team denounced the abuse, as did the media and the public. These naysayers went quiet, but unfortunately, they’ll be back.

4 An Artist Treads on Toes

This case raises many questions about the right to free speech. Gregory Alan Eliot is an artist who seems to have seen Twitter as an extension of his art. Eliot sometimes sent as many as 300 tweets daily on every subject under the sun. His tweets were often strongly opinionated and could often be crude. Needless to say, he made enemies.

A woman named Steph Guthrie reported Eliot to the authorities for harassing her. Guthrie had founded a political group, and she and Eliot had once been allies. They fell out, and Eliot took her to task over various issues on Twitter.

The police arrested Eliot, and he spent three days in jail. He was abused by Guthrie’s followers and spent all of his money clearing his name. Finally, the court dropped the charges, but too late to save his reputation.

Surely, he was just exercising his right to free speech. Injudicious sometimes, perhaps, but criminal?

A teenage girl was an avid user of an appl called LiveMe. Until an anonymous user (or users) mounted a campaign against her. A message appeared on the app telling her to kill herself; her home address appeared on Twitter, suggesting that someone might like to rob the house, and someone superimposed her face on pornographic messages.

The girl, not surprisingly, suffered from anxiety attacks and reported the matter to the police. In this case, there was little that the police could do.

It’s all very well to advise people to ignore trolls, but young people are especially vulnerable to trolling, and some are driven to suicide. In these cases, social media platforms should exercise more control over their content.

A young mother parked her car next to a river and nipped into a building for a minute. Tragically, she had left her two-year-old daughter in the car. The car rolled into the water, and the child drowned. Of course, the mother was to blame. She shouldn’t have parked where she did and shouldn’t have left the child alone. She admitted as much on Facebook as she blamed her own stupidity.

Trolls were quickly on the attack. Circling like sharks that sense blood in the water. Other users came to her defense, and the sharks went looking for other prey.

The woman left herself open to abuse. She posted online about what should have been a purely personal matter. We are open to hateful trolls when we do this, even if we are trying to bring awareness to bigger issues.

1 On a Large Scale

This example shows how big trolling can get and how far it reaches. Digital Africa Research Lab and Buzzfeed News exposed an enormous trolling operation based in Nigeria.

A PR firm based in Nigeria and a British nonprofit organization paid small sums to Nigerian influencers to tweet support for a dodgy Colombian businessman, Alex Saab, with whom the United States authorities wanted to talk to about money laundering. Saab had close contacts with Venezuela and did an estimated $135 million worth of business with Maduro’s government.

The Colombian government also accused Saab of laundering an estimated $25 million. On a brief stopover in Cape Verde, the local police arrested Saab, and a court authorized his extradition to the States.

The Nigerian influencers lent their names to a campaign to free Saab when most didn’t know who he was and couldn’t have cared less. The campaign operated on a grand scale but was unsuccessful. Twitter suspended 15,000 accounts of people who had taken part. I have lost count of the number of countries involved.