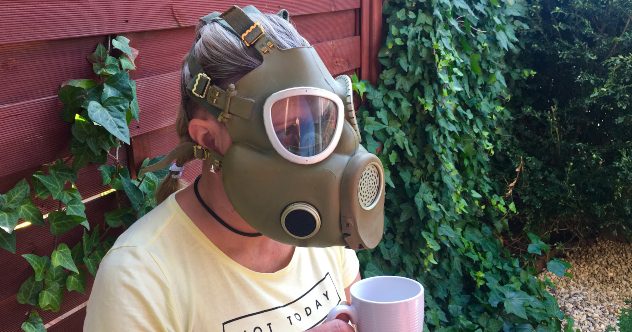 The world can be a scary place. The presence of disease, unstable governments, violence, terrorism, and war all around the world makes everyone uneasy. Some people take this fear and channel it into doomsday preparation. After all, if the world is going to fall apart, you should at least have a safe place, like a bunker, to shelter and protect yourself and your loved ones.

While this idea sounds good in theory, the problem is that building and using a doomsday bunker is not always easy. And, as the individuals on our list found out, it is also not always safe. Not all of these stories end in a tragic death (although, fair warning, many of them do), but none of these situations turned out how these preppers wanted them to.

Being a prepper can go wrong in a lot of ways. Whether it is a lack of planning, an excess of planning, unstable companions, or a general disregard for the rule of law, these are the ten craziest times that being a prepper went horribly wrong.

A lot of paranoia is associated with the prepper community, and the first person on our list is a prime example. Despite his name, Norman Feller is far from a “normal fella” (sorry, I had to).

Like many people at the time, Feller was extremely concerned about the coming of the new millennium and the potential Y2K disaster. Feller took it a few steps farther than others, though. He built an underground bunker before 2000 and stayed in the bunker. Not for just a few days, but for 14 years. He only emerged in September 2014.

I can only assume that fear and paranoia played a major part in his underground living for over a decade! Despite that, Feller was in good health and spirits, unlike many others on this list.

Another crazy time that being a prepper went horribly wrong ended in a fatality. Daniel Beckwitt was a stock trader with an interest in doomsday prepping. Beckwitt hired Askia Khafra to help him build an underground series of tunnels and a bunker directly underneath his house.

Unfortunately, Beckwitt had big ideas but was not sufficiently concerned with his friend’s safety. First, Beckwitt tried to be secretive; he convinced Khafra that they were working in Virginia rather than at his Maryland home. Khafra worked for days in a row, even eating, sleeping, and using the bathroom in the underground tunnels.

Tragically, a defective electrical outlet in Beckwitt’s basement caused a fire. Beckwitt tried to scream and get help for Khafra, but it was too late. By the time emergency services arrived, Khafra was dead. Beckwitt was eventually charged with second-degree murder and sentenced to nine years in prison.

Bruce Beach was a fascinating individual. He created the largest known private fallout shelter, the Ark Two, in Ontario. This project began in the early 1980s and continues to this day. Beach began by burying 42 school buses and connecting them underground. He was planning his entire life for the apocalypse he was sure was coming.

Unlike many other preppers, Beach was not focused only on his survival but also on the survival of others. Because of this, he was often referred to as the “Noah” of Ark Two.

Unfortunately (or perhaps, fortunately), he passed away from a heart attack in 2021, long before he truly needed to use his shelter. Considering how he spent his life and money, it is a crazy irony that he died of a heart attack. The Ark Two is alive and well, but without its “Noah,” who knows what will come of it long-term? We may just have to wait for the apocalypse to see.

In 2008, in the Penza region of Russia, more than 30 people lived for over five months in an underground bunker. These people were cult members and lived underground because they were assured of an upcoming apocalypse in May 2008.

Seven people left the bunker in March, while more than 25 remained behind, including four children. The roof of the bunker collapsed, leaving the others in considerable danger. The roof collapse also led to other predictable problems, such as a sinkhole collapse.

Fortunately, despite the crazy circumstances, there were no confirmed fatalities, despite some rumors of murder. (What??) There were also no reported apocalypses.

The next person on our list is an example of when someone has crazy ideas and more money than they know what to do with. Barrett Moore and Brad Thor were partners of sorts. They were both very interested in doomsday prepping. Specifically, they were interested in stockpiling weapons and military supplies.

Moore provided the funding for the majority of their projects. One such project, the “Garage Mahal,” was enormous, almost like a fortress. So, how did this go wrong for Moore? Well, he didn’t pay his bills. Moore was sued for many things, including guns, masks, and freeze-dried foods.

But, things would get worse for Moore. Moore and Thor eventually had a falling out, and Thor sued Barrett Moore. The lawsuit was for more than $200,000 of prepper gear. Their contentious relationship continues to this day.

One of the most well-known preppers in the world is Tim Ralston. In fact, he is one of the few preppers that are available to the media and regularly conducts interviews. You may know him from the Doomsday Preppers show on National Geographic.

Ralston prides himself on being ready and prepared for any event. He wasn’t ready for what happened to him, though. Ralston was practicing shooting when his gun discharged unexpectedly, blasting his left thumb almost completely off.

Fortunately, he was able to get medical care quickly. His thumb is shortened because the middle part was completely shot off, but he has recovered (besides having a short thumb). I guess it’s a good thing he wasn’t in one of his bunkers at the time.

In February of 2022, there was a home invasion and a murder in Richmond, Kentucky. However, this was not a typical home invasion. The home was a mansion worth more than six million dollars. The owner of the home was former Kentucky legislator C. Wesley Morgan. Unfortunately, his daughter, Jordan Morgan, was killed by gunfire during the home invasion.

However, the motives for the murder make this a really crazy story.

Apparently, C. Wesley Morgan was a doomsday prepper, and his mansion has an elaborate doomsday bunker. The shelter is apparently more than 2000 square feet and features two escape tunnels. And according to Fox19.com, the doomsday bunker was a driving factor or motive in Jordan Morgan’s murder and the home invasion in general. Fox19.com also indicated that the bunker itself is valued at three million dollars.

Another star of Doomsday Preppers is Tyler Smith. Smith was also the owner of Spartan Survival, a doomsday prepping business. Smith has reportedly boasted about plans to steal from other preppers, specifically firearms, when the apocalypse comes. Now that is crazy enough on its own, from my perspective.

According to q13fox.com, his neighbors also thought it was “strange” and “real ridiculous.” However, Smith got what was coming to him way before any apocalypse. He was arrested back in January 2014 for felony possession of firearms.

On Doomsday Preppers, Smith demonstrated that he had many weapons he was not legally allowed to possess as a convicted felon. Perhaps he should have focused more on his real situation instead of imagining future scenarios.

Near Talco, Texas, an explosion was reported on October 13, 2019. The explosions injured three people, Michael Bower, Misty Marple, and Perry Fetterolf. The three had planned and worked together to make (you guessed it) a doomsday shelter. They were planning a way to live off the grid.

The three had made significant progress, with a shelter 10 feet (3 meters) underground containing multiple rooms and even a kitchen and bathroom. Despite this progress, they clearly made a serious error. The bunker had a natural gas leak.

Authorities are not sure that this caused the explosion, but whatever the origin, all three of these preppers met an untimely end along with their beloved bunker.

A survivalist group called “River Otter Preppers” near Tampa, Florida, was convinced that the end of times was coming, thanks to their interpretation of the Bible. The group was focused on weapons accumulation and making improvised explosives.

In 2014, authorities were alerted to their activities, and the three members were eventually arrested on June 18, 2014.

Their leader, Martin Winters, led authorities on a two-day manhunt until he was eventually arrested. Considering their experiments with explosive devices, it is a good thing for all of us that Winters, and the rest of the River Otter Preppers, were stopped before they could hurt themselves or others.

Will King Charles III Abdicate The Throne? #SHORTS
Top 10 Scary North Korean Mysteries
10 Child Actors and Where They are Now
How Divorces Work In Westeros (House of The Dragon) #shorts
Top 10 American Businesses That Failed In Foreign Countries